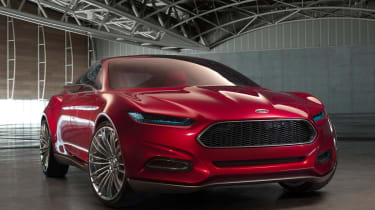 Not that this stylish coupe concept is giving us a view of a future production model – despite the inevitable ‘new Capri’ headlines. Rather, it’s being pitched as the debut of Ford’s ‘Kinetic 2.0’ design language, the new corporate look that’s set to be applied to all of the Blue Oval’s next generation models. So don’t be surprised to see a similar front end treatment on the mk4 Mondeo.

Still, at least Ford knows how to do motorshow magic. The Evos features clever two-piece gullwing doors front and rear – those would be perfect for the next S-Max – plus an interior that seems to have come straight from the 22nd century with all-digital instruments and touch-surface interfaces.

The concept is powered by a 2.0-litre ‘Atkinson Cycle’ petrol engine driving the front wheels, assisted by with an electric motor (seemingly mandatory on all modern show concepts) – something similar is likely to appear in forthcoming production versions.

So should we read anything into its psuedo-coupe bodyshell? Ford hasn’t produced a European coupe since the unloved Cougar was unceremoniously euthanised, but the company has also been consistent in its claims that a modern-day Capri would struggle to sell in realistic volumes.