It's got skip-loads of torque, hits 137mph and looks good, but is the diesel ST genuinely sporty? 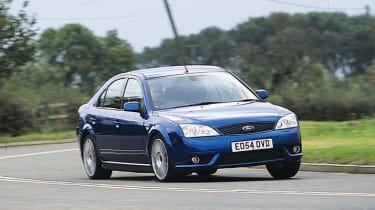 Sporty diesel. Is that an oxymoron? Not so, reckons Ford, claiming that its most powerful diesel engine really does justify the red ST badge tacked to this Mondeo's rump and the body styling and 18in alloys of the V6-engined ST220. The ST TDCi's engine is a 2.2-litre turbocharged in-line four with 153bhp and a thumping 265lb ft of torque, a figure that rises to 295lb ft in 'transient over-boost' - floor the throttle completely and you briefly get an extra 30lb ft for even snappier response. Even without over-boost, the ST diesel is much torquier than the ST220, which musters 204lb ft. Mind you, on price there's not that much between the two STs, the V6 costing just £1755 more. There's little charisma to be enjoyed when, first thing in the morning, you settle into the half-leather seat of the diesel ST, watch the glowplug warning light blink out and fire the Duratorq engine into life. 'Taxi!' springs to mind. The cast-iron block takes some warming, too - it's a good five minutes before the temperature needle has budged and the heater starts working. That typical diesel clatter softens a little but you can never forget that there's a diesel 'four' churning away beneath the bonnet. Also, on a light throttle there are mournful whines from the turbo that sound like a distant police siren. Then you get the chance to try full throttle and things get a lot more interesting - from 1500rpm there's a substantial shove in the back, and it continues through to 4000rpm, while the engine will push on usefully to 4750rpm before hitting the governer. It really is very strong and in the lower gears can trouble the traction control in the wet. For a diesel, throttle response is crisp, thanks not only to scant turbo lag but also because there's no dead travel in the throttle - in many diesels it's hard to blip the throttle with your right foot when braking because nothing seems to happen for the first couple of centimeters. Yet while this Mondeo certainly feels gutsier outright than the ST220, that surge of torque is all there is to enjoy. The flexible and rev-hungry 3-litre petrol V6 gives you options, allowing you to punt along on the torque or stretch it to the redline, all the while with the accompaniment of a classy, characterful note. The rumble of the 2.2-litre diesel is ever-present, and in a way it's a less flexible engine - to reach 137mph with such a comparatively narrow powerband means sixth is good for almost 40mph/1000rpm, so you have to downshift as you enter towns. Indeed, you find yourself changing gear a lot to be in the middle of the torque - it's like a VTEC with the grunt at the bottom of the rev-range. Economy is strong, though; while the ST220 averages around 26mpg, the ST TDCi won't go much below 40mpg. The diesel is a chunk lighter than the V6 too - 76kg to be precise - most of that in the nose. Generally, it's a poised, fluent chassis but the 225/40 ZR18 tyres don't give this version quite the same keyed-into-the-road feel we're used to from Mondeos. It feels almost as if the suspension settings of the ST220 have been carried over to the less bulky diesel, the steering seeming a little glassy and light, too. The diesel ST is a quick car and it's the sensible choice if you cover huge mileages but want sporty looks and oodles of grunt. However, its engine isn't sporty in feel or sound and it doesn't give the car any character. It's a purchase you'd make with your head rather than your heart.