Aren't modern diesels wonderful? I relish long trips in the Mondeo, taking delight in the amount of fuel I'm not using. Recently the average consumption readout nearly touched 40mpg, and no matter how hard you push, it never drops below 35. 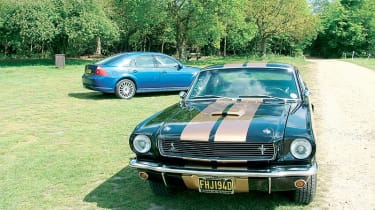 Aren't modern diesels wonderful? I relish long trips in the Mondeo, taking delight in the amount of fuel I'm not using. Recently the average consumption readout nearly touched 40mpg, and no matter how hard you push, it never drops below 35. There are a couple of blots in its copybook, however. As the weather has got warmer we've noticed that the air-con doesn't drop the temperature as quickly as you might expect, and seems a bit noisy. There's also a slight whiff of diesel from under the bonnet which needs investigation, but it will be going in soon anyway to have a scratch sorted out on the nearside rear door and wheelarch inflicted by a careless parker.

OK, it's a hard car to get excited about. Unlike Paul James's GT350H Shelby Mustang. In fact, Mondeo and Mustang are a nice illustration of how far we've come in nearly 40 years; a 40mpg 140mph diesel hold-all and a 10mpg, 130mph iconic muscle-car. The H stands for Hertz by the way.

That's right: back in 1966, so long as you were over 25 and had the required $17 a day rental money, Hertz-Rent-A-Car would let you loose in one of these things. The idea of leasing 1000 detuned production racers to Hertz as rental cars seems crazy, but that was the deal Shelby swung. The cars, mostly raven black with trademark gold stripes, provided a useful boost to the GT350's flagging sales and accounted for 40 per cent of Shelby American production.

Hertz hired out the cars from major American airports, replacing its fleet of Corvettes. It was more of an image-boosting exercise than a money-making one. Customers' alleged abuse of the cars is all part of the rent-a-racer myth; stories of Hertz cars being raced at weekends, roll bars hastily removed and the bolt holes covered with carpet, are unsubstantiated but make good copy.

Whatever the truth, it seems likely the Hertz cars, like all hire cars, were open to some kind of abuse or at the very least suffered inept drivers. The cars' racing brakes certainly caused a few anxious moments, as they didn't do much stopping until they had some heat in them, and many suffered crunched noses until a modified master cylinder supplied by Minnesota Automotive was fitted. One of the identifying marks of a true Hertz GT350 is a sticker on the dash that says: 'This vehicle is equipped with competition brakes and heavier than normal brake pedal pressures are required.'

Apparently, customers didn't appreciate the noisy limited slip differential, the stiff ride and the he-man Borg Warner T10 gearchange - although the first 100 or so cars were 'stick', most of the Hertz cars came with a beefed-up Ford C4 automatic transmission. Some renters even complained about the sound of the 289 Hi-Po engine. The Hertz answer to that was to fit a Motorola push-button radio.

This auto GT350H, belonging to 31-year-old railway worker Paul James, is one of only two or three in the UK. When the Hertz lease deal came to an end, Shelby sold-off the ex-rental GT350s fairly cheaply. A few, like Paul's car, were given an up-dated 1967 model-year tail with the flipped-up boot lid and the bigger tail-lights.

'They're a working man's supercar really but they are getting out of that league now,' says Paul. 'A lot of very rich people are buying them and just storing them away and it's just whacking the prices up.' This car had two or three different owners out in the States. It was stolen and stripped, painted a different colour then put back to standard by its last American owner.

Paul isn't afraid to using the Stang, which is immaculate but no trailer queen. 'I take it to shows but I don't really get involved in concours. I'd rather drive it about and scare myself, put a silly grin on my face and then just park it up.' Jeremy Clarkson used it in his 'Best Car of All Time' piece on Top Gear although he wasn't allowed to do doughnuts. It would certainly do them very nicely, mind. 'If you floor it even just a little bit it slides about,' says Paul. 'It does about 130mph flat-out but it's very quick getting up there. I'd prefer one with a stick but the automatic is all part of the Hertz thing.'

Paul is a true Carroll Shelby devotee. He even took his GT350H glovebox lid out to a Shelby show at Nashville. 'You queue up and Carroll Shelby will sign your glovebox lid for $50 dollars with the money going to charity, but he limits himself to 200 a day because of his bad wrist. Some people were giving him five or ten to do and selling them for a profit on eBay...'