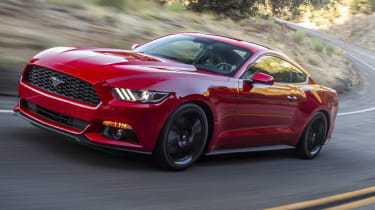 Despite the fact that the first Ford Mustang arrived some 34 years before evo landed on the newsstands in 1998, it’s fair to say we’ve had a fairly short relationship with the American muscle car. Our first real stint in one was when Richard Meaden ran a 2005 GT in Fast Fleet, and since then we’ve had a bit of a soft spot for the Yank brute. So with the arrival of an all-new model, we thought it worthwhile to delve back into our archives and remember our experiences with the ‘Stang. 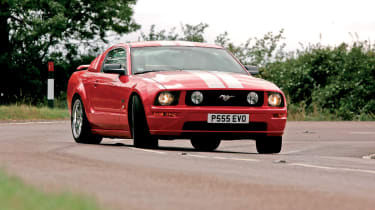 When Meaden first confirmed the import of his long-termer Mustang GT, he was quick to voice his concerns about its solid live rear axle, which he described as ‘old enough to be my dad.’ Thankfully, as soon as he sampled the Mustang’s ‘4.6-litres of prime American V8’, he was quickly sold on the idea.

The ‘Stang’s engine was almost immediately treated to a remap at Litchfield to help it run better on the UK’s higher octane fuel. The final output rose to 315bhp (up 10bhp on standard), and the results saw evo’s staffers fighting for the Ford’s keys. It covered a substantial 3472 miles in its first month, including a trip to the Nurburgring,

‘Phwoaar, it sounds good doesn’t it?’ and ‘it’s a bit bloody hairy in the wet!’ were comments that frequently left the mouths of the red Mustang’s drivers. It wasn’t as thirsty as you might imagine either, averaging over 20mpg most weeks.

After fitting larger Roush alloys and stickier tyres, Dickie enjoyed the Mustang even more. He said in evo 091 ‘powerslides now have satisfying progression, and it’s possible to adjust the Mustang’s stance more accurately with the throttle, rather than poking the tail out and holding on tight.’ 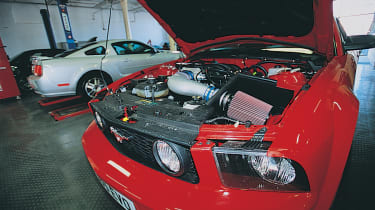 And even today, he still looks back on the ‘Stang fondly: ‘it was good fun, actually. Admittedly, it was a bit soft and lacked grip in standard spec, but it was better on Roush rims and bigger rubber. It didn’t have a huge amount of finesse - it got a bit excited over sharp crests and mid-corner bumps - and it felt BIG, but it was enjoyable and playful enough nonetheless.’

It might have featured a rather crude rear suspension setup, and build quality left a lot to be desired, but as an overall package, evo was a fan of the Ford Mustang GT. 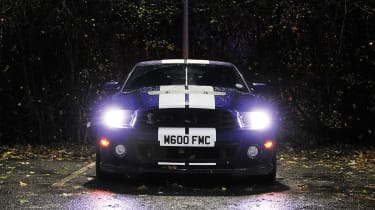 ‘I love a bit of sideways action as much as the next man, but I quite like to know when it’s going to happen.’ Jethro Bovingdon was, and is, no stranger to going sideways. But even he conceded that the next Mustang we drove, Shelby’s 662bhp GT500, was just a bit overpowered. 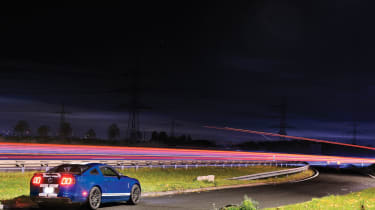 On paper then, the GT500 was enticing to say the least. But unfortunately, that promise didn’t quite translate on the road. ‘It is a mightily fast car once it’s up and running’ Bovingdon said. ‘But there is no way this huge hunk of metal will hit 200mph without being dropped from space.’

What were the issues? Jethro explained: ‘at lower speeds you’d bet your house that the Eaton Roots-type supercharged 5.8-litre V8 has nothing like 662bhp. It feels pretty mighty, of course, but no more extreme then something like a C63 AMG and certainly not even close to a 911 Turbo or Nissan GT-R.’ But the nail in the coffin came with the car’s handling: ‘the ride is agitated and the rear axle cracks and shimmies and leaps over ridges. Over crests and into compressions the whole car floats and then crashes.’

So having grown so fond of Dickie’s Mustang seven years earlier, our go in a GT500 left us a little disheartened. In 2013, the car’s use of a solid rear-axle just wouldn’t cut it. 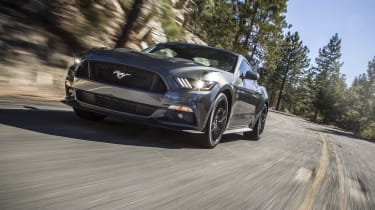 Fast forward to 2014 and finally, Ford has fitted the Mustang with a rear suspension setup to set carmakers of Europe on edge. When we first drove the latest Mustang in 2014, it featured a proper multi-link setup out back, bringing it into line with its European alternatives.

The results were immediately noticeable, as David Vivian explained: ‘The ‘Stang is a different car, with what appears to be a superstar chassis. It feels amazingly planted and settled with exceptional, and wholly unexpected, reserves of grip evenly balanced from to rear.’

Quite the contrast to Meaden’s easily unsettled GT then, and a whole other world from Bovingdon’s ‘crashy’ Shelby. But though the new Mustang has moved things on substantially from its predecessors, can it really take it to the likes of BMW, Mercedes and Audi? 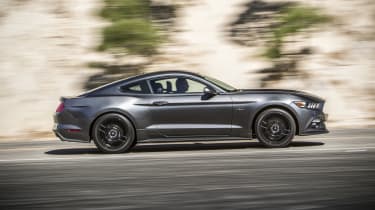 In the same test, we matched the new ‘Stang against an inevitable strong seller, the new Audi TT. We drove both the 306bhp 2.3-litre EcoBoost four-cylinder and 420bhp 5-litre V8 engined Mustangs, and sampled the 306bhp 2-litre TFSI four-cylinder TTS quattro. The results? The ‘Stang held its own.

Okay, so the EcoBoost car lagged behind the V8 thanks to its less characterful engine, but the V8 - which sells for £5905 less than the TT at £32,995 – achieved an equal four out of five stars. And as Vivian conceded, there’s only one car that Steve McQueen would be seen driving…

How fitting that Richard Meaden, the first evo staffer to properly explore the Ford Mustang, would be the person to drive the new one in 2015. He remembers the old GT well, so is well placed to assess how much in common the new car has with its predecessor.

He said this after his first go in the new car: ‘first impressions are good. It looks terrific - taut and modern, but still recognisably a Mustang - and it has real presence amongst other traffic. Even the interior looks impressive, but the plastics are very hard and scratchy. No soft-touch materials here!’ 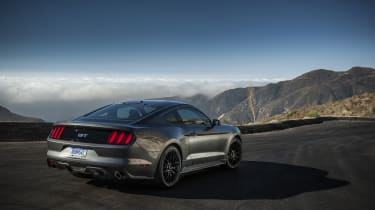 Naturally, the car Meaden wanted to drive most was the V8. Having heard David Vivian sing praises of the motor, could it live up to the hype the second time around? ‘It certainly feels strong and smooth. It sounds good too - honest and authentic, not contrived.’ That’s a yes then.

He goes on to say: ‘the gearbox has a short throw and a slick action. Though the brakes are overly sharp, which means you risk whiplash injuries if you try to heel-and-toe. Performance is muscular, but not urgent like, say, a BMW M4. But then we can’t forget, it's not worth much more money than a Renaultsport Megane Trophy!’

To confirm, the Megane Trophy starts from £28,930, which is £4065 less than the V8 ‘Stang. But when you consider that the former is a hotted-up hatch – admittedly, it is our pick of the front-drivers – and the latter is a full-blown V8 sports coupe, the new Mustang makes a pretty strong case for itself.

You can read about Richard Meaden’s drive in the new Ford Mustang in evo 210.