New special Ford Mustang, updates for the Ecoboost, and another year of Bullitt production 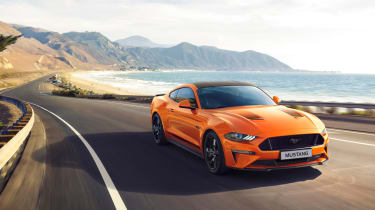 Ford has revealed a new special edition of the Mustang, but don’t hold your breath for it reaching the UK, as this one is destined for mainland European markets only.

Known as the Mustang55, the special is based on the V8-engined Mustang GT, and as you can probably guess from the name, is designed to celebrate fifty-five years of the Mustang, currently in its sixth generation.

The Mustang55 is available as both coupe and convertible variants, and brings with it a series of small details to mark it out from the conventional GT. Predominantly, this involves a black stripe on each side of the car and on the bonnet, fading as they go further backwards. 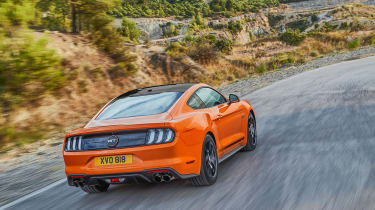 The wheels are painted gloss black, and coupe models also have a matching black roof. The stripes become silver if the buyer opts for black paintwork, but this would be a shame given some of the bright shades available across the Mustang range, including Twister Orange, Grabber Lime, Iconic Silver and Lucid Red.

Further black details include the upper and lower front grilles (and the Mustang pony badge itself) along with the front wing 5.0 badges and an optional rear wing. Inside, manual cars get a unique gearknob, and automatic models get an aluminium knob for the gear selector.

Otherwise, kit remains fairly comprehensive, as it does on other Mustangs - seats which can be heated or - more importantly in this weather - cooled, Sync 3 connectivity, a 12-speaker B&O sound system, and perhaps most relevant of all, the same 5-litre naturally-aspirated V8 that we know and love.

The 2.3 Ecoboost is still available though, and that too gets some tweaks that unlike the Mustang55, should be rolled out across the range. Styling takes influence from the hot Shelby models offered in the US, including a special grille and new 19-inch alloy wheels. An active exhaust with Ford’s helpful “good neighbour mode” for quiet morning starts is now standard.

Meanwhile, Ford has confirmed it will produce the tweaked Bullitt model for another year, thanks to high demand. High demand has been a factor of the new car right from the start, in fact - Ford says it has now sold over half a million sixth-generation Mustangs, and nearly a tenth of those have gone to homes in Europe.