Pininfarina's all-electric HK GT is fit to topple a Tesla Model S – it's a shame it's only a concept. 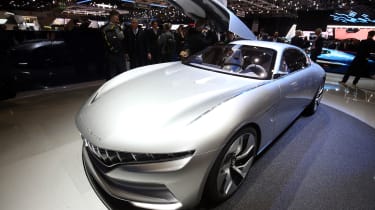 After all the teasers, Pininfarina has finally publically debuted its hi-tech HK GT concept at this year’s Geneva motor show. Produced in partnership with Chinese technology firm Hybrid Kinetic Group, the 2+2 GT is the fourth design study from the pairing, following on from the H600 saloon and K550 and K750 SUVs.

The many leaked images means we’ve already seen much of the car’s exterior, but at the Geneva unveil Pininfarina revealed that the HK GT would be powered by a novel range extending hybrid powertrain that pairs traditional electric motors with Hybrid Kinetic Group’s microturbine unit. Able to be tuned to run on a wide range of fuels – conventional petrol, renewable and hydrogen – the aerospace-inspired power until is said to produce 60 percent lower emissions than current EU6 compliant internal combustion engines.

Linked to the turbine is a powerful 20kWh battery pack that powers four electric motors, each with a two-speed transmission. Combined power output is estimated at a heady 804bhp, resulting in a supercar-slaying 0-62mph sprint time of just 2.9 seconds – although top speed is electronically pegged at 155mph. Yet in pure electric mode the HK GT is claimed to have a range of over 60 miles, while in range-extending mode it’s possible to travel more than 600 miles between fill-ups. 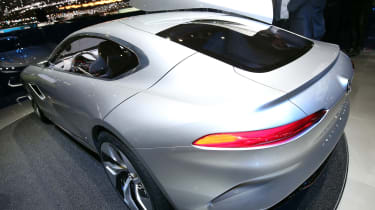 With an electric motor for each wheel, the HK GT can deploy dynamic torque vectoring, with each unit getting its own control unit. Handling is further enhanced by the near perfect 52/48 front to rear weight distribution, plus the fact that the aluminium structure helps to keep weight down to a respectable 1860kg. There are two driving modes, ‘Cruise’ and ‘Race’, with each one having a distinct effect on the steering, suspension and powertrain. Each mode comes with its own ambient lighting effect for the cabin – a cool blue for Cruise and an aggressive red for Race.

Another highlight of the HK GT’s cabin, which is accessed via distinctive gullwing doors, is the ‘floating’ dashboard with minimalist TFT instruments that bring up only essential information for the driver. Ahead of the passenger is a pop-out screen that provides access to climate control, navigation and the internet. Integrated into the transmission tunnel is another large screen, which rear seat passengers can use to connect to the various onboard functions.