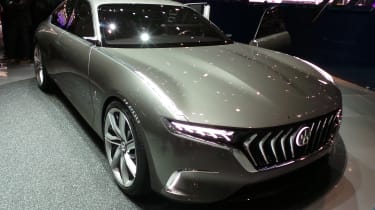 Pininfarina and the Hybrid Kinetic Group have revealed a new luxury saloon concept at the Geneva motor show.

Dubbed the Pininfarina H600, it aims to combine classically elegant styling with a unique range-extended hybrid powerplant, that uses a turbine, rather than a conventional piston engine, to supply additional power.

It’s too early to say how effective the hybrid powertrain is, and no details have been revealed about this specific setup beyond its turbine hybrid nature.

Hong Kong-based Hybrid Kinetic Group does specialise in turbine systems however, and its website makes claims that its turbine generators are as little as a half to a third the size of a conventional piston engine, runs 20,000 hours maintenance free and can run on virtually any fuel - from petrol and diesel to hydrogen, or propane. 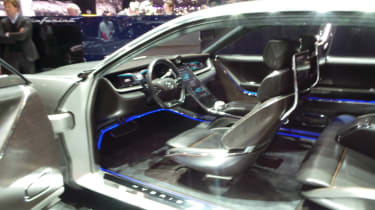 The styling is less groundbreaking in concept but as handsome as you’d hope for, from something bearing the Pininfarina name. It takes the form of a traditional four-door saloon, albeit one with rear-hinged rear doors and the absence of a B-pillar, leaving unhindered access to the cabin.

The body is pleasingly free of fripperies, with smooth surfacing and a clean, sweeping roofline. There’s a hint of modern Maserati to the expansive grille with its large vertical strakes - a design intended to direct as much air as possible to the turbine - and we see a touch of Lincoln in the body-width horizontal rear light unit. It’s not dissimilar to Pininfarina’s last significant saloon concept, the Cambiano of 2012, though that car was entirely battery-powered, with an electric motor for each wheel.

Inside it’s typical concept car fare, though once again attractive and elegant. Shapely seats sprout from the floor, their wooden shell backs echoing similar treatment on the floors and interior door panels, evoking - says Pininfarina - the tradition of cabinet-making.

Natural leather features widely - on the seats, doors, dashboard and steering wheel, at a glance - while a large touch-sensitive panel between the seats also seems suspended in mid-air, with nothing to divide the driver and passenger footwells. Another screen spans the dashboard, and the floors and door cards are split by luminescent strips.