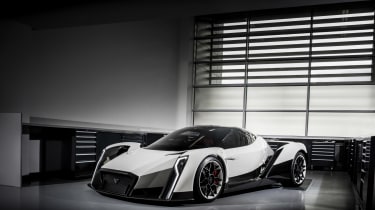 Singapore's first ever hypercar has made its debut at the Geneva motor show, in the form of the all-electric Dendrobium concept.

It's the work of Singapore electric mobility firm Vanda Electrics, along with a high-profile engineering partner: Williams Advanced Engineering.

The British firm has been drafted in to co-develop the concept and 'assist in future project development', where it will exercise its expertise in batteries and electric drivetrains - Williams is also partner to Jaguar Racing in Formula E - as well as aerodynamics and composites. Given Vanda Electrics' existing products include back-to-basics commercial vehicles and scooters, the presence of a company more familiar with speed will no doubt be vital in giving the Dendrobium some credibility in the marketplace.

evo got an early preview of the Dendrobium at Williams Advanced Engineering’s headquarters in Grove, Oxforshire, a couple of weeks before the car’s Geneva reveal - and we spoke to both Ian Cluett, Williams’ head of programmes, and Vanda CEO Larissa Tan.

While the project has seemingly come out of the blue, the first sketches actually happened as far back as 1996. Tan explains that the company has wanted to produce such a vehicle for some time, but only now has technology advanced to the point where it’s feasible - in terms of both cost, and the packaging and energy density of batteries. 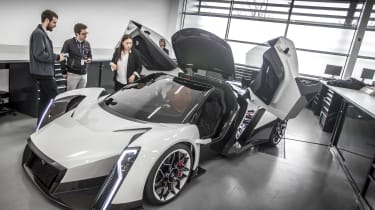 Even so, fitting these batteries into the Dendrobium’s tightly tapered rear end hasn’t been easy, albeit less difficult than an engine might have been. The concept car is rear-wheel drive alone, using a direct drive single motor, but should the car reach production then the aim is to use a single motor through a two-speed transmission, supplemented by a single motor for the front wheels.

This means Rimac-style torque vectoring isn’t possible, but does keep the package mechanically simple. The gearbox itself is simple too; an automated manual, albeit one that shouldn’t replicate the issues faced by road-going automated manual transmissions, which tend to have jerky shifts. Here the electric drivetrain helps - the clutch can be engaged and disengaged almost instantly, since an electric motor doesn’t need to build up to a torque peak like a combustion engine does.

Vanda quotes a 0-60mph time of 2.7 seconds - perhaps not as "ludicrous" as we’ve come to expect from electric cars recently, but let’s not lose sight of the fact that 2.7 to 60 is still monumentally brisk - and a top-speed of more than 200mph. The two-speed gearbox helps reach this upper velocity, but rather than disengaging the front electric motor, it’s simply geared for a higher speed. Cluett accepts that it won’t output the same torque as its counterpart at the rear, but it’s worth it for the extra accelerative traction.

To each end a subframe is attached, carrying the the suspension and electric drivetrains. Cluett says carbonfibre subframes are a consideration, but aluminium is currently used as it has some desirable properties, not least crash absorption. Target weight is in the 1750kg range, but Vanda won’t commit to a range figure - that all depends on the battery technology that may go into the car by the time it reaches production. The brakes are carbon ceramic, and the brake calipers and wheels are alloy. 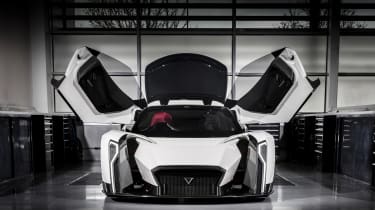 It’s at this stage I should point out that the Dendrobium looks beautifully constructed, even in this concept form. Some elements haven’t been finalised (though if it does reach production, little should change visually). The bodywork is smooth and fits well, and the exposed suspension arms and dramatic aerodynamic elements are top-drawer supercar cool. Dendrobium’s party piece - the simultaneous opening of its rear-hinged doors and roof (the orchid-like blooming of which gives the car its name) is also brilliantly executed and gives the car a USP in a segment already full of crazy entrance options. This, too, was apparently very difficult to engineer.

Aero is entirely fixed, and mostly underbody - though it’s difficult not to imagine the Le Mans Prototype-style vents and slots serving a purpose. Cluett points out that the actual cooling grilles are relatively small - electric motors and batteries don’t need nearly as much heat management as a combustion engine and its attendant components.

The cabin is impressive too. Tan describes the unique seat stitching as being like human muscle fibres, and the driver’s seat of the concept is picked out in red to the passenger seat’s black. Throughout the interior are references to honeycomb forms, from some of the seat patterns, to the air vents, switchgear and the graphics on the digital instrument cluster. These honeycomb graphics (chosen because of their natural form) can also be found in the F1-style central “rain light” at the rear of the car. 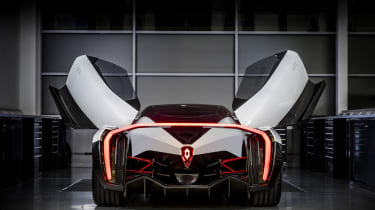 By supercar standards it’s an easy car to get into, aided by the rear-hinged, upward-opening doors that don’t require you to stoop below them or squeeze around them. The carbonfibre tub also means there’s strength without having ultra-wide sills, so the resulting gap is easy to traverse and not unlike that of a McLaren supercar - a brand that majors on day-to-day usability.

A handle inside the A-pillar allows you to support your weight as you slide your feet into the footwell. Space down there seems a little tight, but with only two pedals that’s not really a problem. The fixed-back bucket seat is slim and quite upright and could prove uncomfortable for some, but not to Lamborghini Huracan levels, a car surely designed in league with Italy’s cabal of chiropractors. The near-honeycomb shaped steering wheel is reminiscent of the Huracan though, and behind it are more honeycomb details, in the slim light and wiper stalks.

Importantly, the cockpit does feel like a supercar-special environment. The seats may not be quite the right shape but they’re immaculately trimmed (Bridge of Weir was chosen, as one of the world’s lowest-carbon tannery), the visual carbonfibre elements (structural and decorative) look stunning and there’s a dramatic view out over the front wings.

You sit low, but not intimidatingly so, and even with the doors closed it seems like there’d be decent visibility on the move. That’s hugely aided by the use of cameras, rather than mirrors, for rearward vision. The mounting of two screens within the car isn’t the best-integrated, but it’s definitely practical, and makes up for the lack of any view through the full wall of carbonfibre behind the seats. 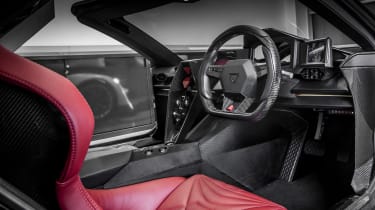 Vanda has deliberately kept the cabin simple, so other than the main information screen you’ll find no touchscreens or complex controls - just a small bank of centre console and dashboard switches, among which are the buttons for drive, neutral, park and reverse.

The sticky issue of price has not yet been breached. Tan isn’t saying anything at this stage, but we’re later informed that it’s safe to assume a seven-figure tag. Dendrobium isn’t actually confirmed for production yet, but we’d expect its reception at Geneva will convince Vanda one way or the other. If that happens, then who knows what comes next - Tan says other products are already in the design stage, and Tan doesn’t deny our comments about a possible Dendrobium roadster.

I wasn’t sure what to expect with the Dendrobium. Small-volume supercar, unheard-of electric car firm - the story is usually quite predictable. The one thing I had prepared myself for was a rough, cobbled-together and slightly fragile-feeling prototype hastily polished up for its Geneva appearance, but even the briefest of glances reveals the actual car is anything but - as you’d probably expect from a product so closely linked with a name like Williams.

Full judgement will be reserved for when we drive it, but at this stage, Singapore’s new supercar looks to be a unique, and more than welcome addition to the rarefied super sports car market.