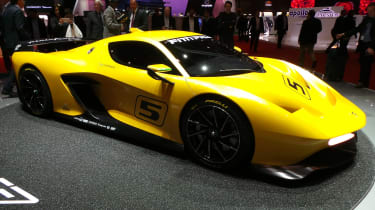 Pininfarina, Emerson Fittipaldi and HWA have worked together to create the EF7 Vision Gran Turismo, which makes its debut today at the Geneva motor show.

It's the latest car in a long line of Vision Gran Turismo concepts, which are designed primarily for the Gran Turismo videogame series - but also serve as design studies for the manufacturers contributing to the project.

The EF7 is former F1 world champion Emerson Fittipaldi's vision of a dream supercar, as interpreted by the famous Italian styling house following a meeting between Fittipaldi and Pininfarina chairman, Paolo Pininfarina.

The two discussed the idea of working on a "benchmark supercar", matching characteristics of high power, balanced handling, and the ability to be used on both road and track - both usable, and aerodynamically efficient. The EF7 is therefore designed to be easy to get in and out of - not always a supercar trait. 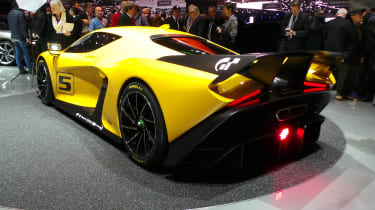 Its sleek styling is very much familiar Pininfarina, if not entirely original - we see more than a hint of Ferrari in some of the EF7's details. Aerodynamic elements are formed from contrasting carbonfibre - the main colour of course being a Brazilian yellow - with a deep front splitter, even more prominent rear wing and diffuser combination, and ground-hugging side skirts.

The headlights are unusual, taking the form of two slim strips below the front aerodynamic blade, while the rear lights are equally slim, hiding along the top of the enormous upper diffuser element.

No powertrain details have been revealed - but an overhead image of the EF7 suggests it's designed around a V8 engine at the very least - which somewhat marks it out from the electric supercars becoming more frequent at this point in the market.

Of course, there are no actual plans to produce the EF7 at this stage, and it's likely the car will be confined to the virtual world via a future update to the Gran Turismo series.