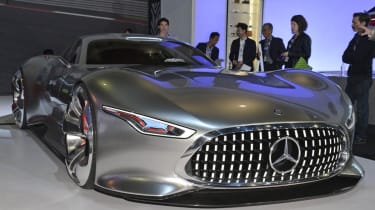 The Mercedes-Benz AMG Vision Gran Turismo has made its bow at the Los Angeles motor show. It is the response to a request from Gran Turismo 6 producer Kazunori Yamauchi to see concepts that preview ‘the further development of the automobile’. It also, to our eyes, appears to preview what we can expect from Merc's new SLS-replacing sports car.

The AMG Vision concept may look to the future, but several of its inspirations are clearly from the past. There are nods to the classic 300SL and the current SLS AMG in its shape, though its gorgeous side profile is a big departure. The car's aerodynamics look much improved and the heavy use of LED lights gives it a far more futuristic look, bringing the Jaguar C-X75 concept to mind from a number of angles. Those iconic gullwing doors are retained, though.

The body is an aluminium space frame, while a number of the Vision’s components are made from carbonfibre. As a result, the kerb weight is rated at 1385kg – around 250kg less than a regular SLS. And the Vision’s 577bhp, 590lb ft 5.5-litre twin-turbo V8 (borrowed from the new E63 AMG S) ensures its 0-60 time and top speed will be an improvement over the SLS AMG’s respective 4.1sec and 197mph. A sports exhaust system with eight rear tailpipes also promises a fairly epic soundtrack to match the performance.

However, all isn’t quite as rosy as it seems. Perhaps predictably given the car’s reason for being, the one you see in pictures is a full-scale model of the AMG Vision that will star in GT6. If you want to drive one, your only option is on your Playstation…

Below is the story behind the Mercedes AMG Vision Gran Turismo's creation, with a handful of slightly predictable quotes from its design team about 'sense of purity' and how emotional the styling is, though there is plenty of interesting stuff in there too, including how the car had to be designed to compete with - and be selected for play above - the other 1199 cars in the game. By being the first Vision Gran Turismo concept ahead of equivalents from Alfa Romeo, Tesla, Subaru, Peugeot and a host of others, the Mercedes AMG concept has a head start.