David Brown's most performance-focused model yet, the Speedback Silverstone Edition has been unveiled at Geneva 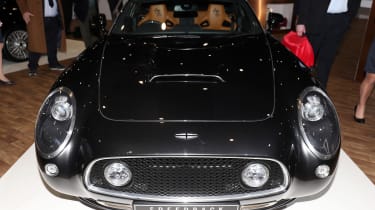 David Brown has taken the covers off a new version of its Speedback, the Silverstone Edition, at this year’s Geneva motor show. The new car promises to be the most performance-oriented model that David Brown has ever produced.

The Speedback Silverstone Edition has been built to commemorate the circuit that David Brown Automotive is now based. To try and reflect the circuit’s motorsport heritage, the Silverstone Edition has more power and torque than the Speedback GT it’s based on. The Jaguar-sourced, 5.0-litre, supercharged V8, the same engine as the one in the GT, now produces 593bhp and 565lb ft of torque – 83bhp and 104lb ft more than the GT. Drive is then sent to the rear wheels via a six-speed automatic gearbox and an active limited-slip differential.

The engine’s extra grunt has helped cut 0.4sec off the Speedback’s 0-60mph time, the Silverstone Edition now hits 60mph in 4.2sec. Top speed, as it is for both cars, is limited to 155mph. 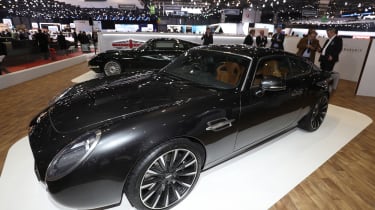 The mature Jaguar underpinnings, however, have been disguised by hand-built retro-style aluminium bodywork. The Silverstone Edition gets more prominent side skirts, a front spoiler, a silver rear diffuser and larger side vents. There’s also a selection of Silverstone Edition plaques on the outside.

Despite the Speedback’s overtly retro aesthetic, the Silverstone Edition is slightly more modern looking than the GT. A set of 20-inch diamond-cut alloy wheels replace the twee wire wheels of the standard GT, the chrome bar grille is gone in favour of Bentley-style mesh with two LED lights nestled within it, the rear lights are now clear, while the silver trim at the front corners – reminiscent of 60’s chrome quarter bumpers – have been removed completely. Silverstone’s aeronautical history has been commemorated by exhaust pipes with a jet-inspired design.

Inside a set of modular bucket seats are trimmed in brogued leather and there’s exposed-pore wood veneer with inlayed metal detailing on the dash. Along side the brushed chrome centre console and bespoke dials are a set of familiar air vents taken from the current Mercedes E-class coupe.