Alpine has disclosed prices for the A110 Pure and Legende trim levels, which were revealed at the 2018 Geneva motor show. 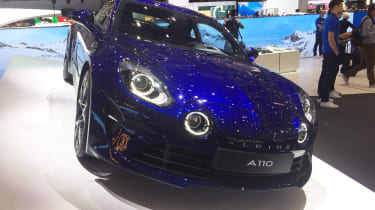 Alpine has announced pricing for the two new trim levels –  Pure and Legende – which will constitute the A110 model-line up going forward. Priced at £46,905 and £50,805 respectively, the pair follow on from the limited-run, Premier Launch trim, which has now sold out.

Earlier in the year Alpine detailed the distinct specifications of both trims, with each getting an equipment list to reflect its remit. Pure is more driver focused, while Legende leans towards grand touring. Alpine attributes the latter’s £4k premium to extra refinements such as electric six-way adjustable seats, an upgraded stereo, front & rear parking sensors with reversing camera and diamond-cut 18-inch wheels.

Going without these extras mentioned above, the A110 Pure model is not only cheaper, but weighs-in 23kg lighter than the Legende, too. Both variants will utilise the same running gear that underpins the Premier Launch edition.

Alpine has also released the options list available on both A110 versions. Most of the extras found in the Legende can be added to the Pure. However, it’s the Brembo brake package with its 320mm discs (£936), the active performance exhaust (£1,380) and Fuchs forged wheels (from £936) which draw our attention and all are available on both trims.

Finance packages and maintenance plans for the A110 have yet to be divulged, although Alpine has confirmed that the car will be covered by a three-year/60,000-mile manufacturer warranty. Those seeking extra cover can opt for extended four- and- five-year warranty plans, of course, at a cost. 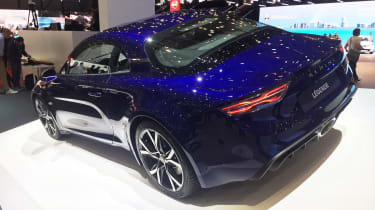 With deliveries of the Premier Launch edition, UK allocation due this summer, don't expect to expect to see Pure and legendes on the road until the final quarter of 2018.