The first Honda to wear the Type-R badge, the Integra, was an instant hit with keen drivers and today is still lauded as one of the best front-wheel drive cars ever made 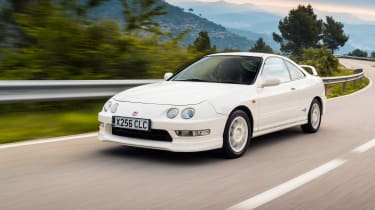 Every so often a car comes along that’s truly groundbreaking. One that years after its debut is still revered as a brilliant piece of engineering, one that has stood the test of time so well that it wins plaudits for the way it drove, even against more modern machinery. One such car is Honda’s Integra Type R (DC2), a car that back in 2006 we proclaimed was the best front-wheel drive performance car ever.

Such a proclamation is bound to spark lively debate and while you might agree/disagree with the Integra’s abilities there’s no getting away from what a great package it was. Even if you don’t see it as being the pinnacle of the front-drive breed you have to admire what Honda achieved with the first Type R to hit these shores.

We knew that Honda was capable of making sublime sporting machinery – witness the NSX – but its mainstream offerings, in the UK at least, were nothing if not a little bland in the mid-1990s. But that all changed when the Integra Type-R came along. Driven like a normal car it failed to excite, but get that VTEC four-pot up towards the top of its rev range and the Jekyll to Hyde transformation was complete with the sort of power to bring the chassis alive.

The Integra Type-R inspired a generation of quick Hondas with red R badges but even considering how good the latest generation of machines are it’s hard to argue against the poise and delicacy of the original. You’ll need to be quick though if you want to experience the original Integra Type-R – prices are on the rise and the British climate hasn’t been kind to them. Our advice? Find a good one and cherish it before it’s too late.

The Integra started life back in 1985 as both a hatchback and a saloon but by the time the first model arrived on these shores in 1997 the Integra was actually into its third generation. Until the arrival of the Type-R the hottest version had been the GS-R with 170bhp – a pretty impressive output from an atmospheric 1.8-litre.

There was more to come from the 1.8 ’four though with Honda’s skilled technicians releasing a further 17bhp for the Type-R. Its finely honed engine was treated to revised inlet valves, lighter conrods, a larger throttle body and molybdenum-coated pistons along with a bigger bore exhaust. The engine was assembled by hand which limited output to just 25 cars a day (with the UK receiving an official allocation of just 500 cars) and was ported and polished as it was lovingly put together.

These ministrations from Honda’s engineers elevated the Type-R’s engine output to a lofty 187bhp at 8000rpm and torque of 131lb ft at a high 7300rpm. Even to this day it remains as one of the highest specific outputs for a naturally aspirated four-cylinder and it would rev to a glorious 9000rpm. It’s a typical VTEC unit, docile and unassuming at lower revs yet when the VTEC variable valve timing makes its presence felt at 6000rpm it switches character and unleashes its manic, joyous demeanour. If you kept it on the boil very rapid progress was possible thanks to a chassis that had been equally finely-honed.

The Type-R would be homologated for racing (that’s what the R stood for after all) so the chassis was strengthened with extra spot welds and thicker metal around the rear suspension mounts. The Integra already had a decent set up but in this application shorter springs lowered the wishbone set up by 15mm while bespoke dampers were fitted. Bushes were upgraded, strut braces were added and the rear anti-roll bar was thickened too. 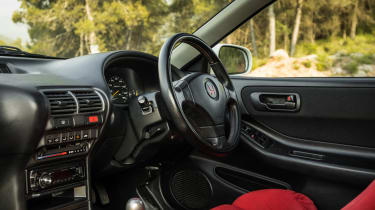 Perhaps most crucially a limited-slip differential was added which gave the Integra its uncanny ability to find grip where there shouldn’t have been any while the wheels were upgraded to still small by today’s standards 6x15-inch alloys items shod with 195/55 Bridgestone Potenzas.

The performance car’s main enemy is weight so the Integra was put on a bit of a diet, too. Sound deadening was removed, the windscreen was thinner and even the cover for the spare wheel was ditched. Inside Recaro sports seats were added as were a few other fripperies such as a titanium gear knob, some carbon trim and alloy pedals. Externally Honda kept things relatively simple with a front splitter, a rear wing and Type-R badging.

A well-maintained example will still thrill today as it did over 20 years ago – it’s not laugh-out-loud fast, but you can revel in its responses, superb grip and tactility without risking your license. Watch for rust, especially in the sills and rear arches and insist on an impeccable service history – that VTEC lump needs regular oil changes.

Drive the Integra slowly and it feels a bit flaccid. You could almost wonder what all the fuss is about, but once that firecracker engine ignites, the humble Honda is transformed into a humdinger. It thrives on high revs, that classic VTEC kick hitting home at 6000rpm, from which point the fizzing four-cylinder emits a magical howl as the tacho needles homes in on and then passes 8000. It’s like driving a real exotic: the super-high-revving engine, rifle-bolt gearshift, rigid bodyshell and incredibly controlled suspension melding to deliver sensationally effective performance.

Grip levels are miraculous on such modest rubber, and the limited-slip differential generates tremendous traction. There’s no torque-steer to speak of, but then it’s hardly rippling with lb ft, which probably explains it. Nevertheless, the combination of taut but supple suspensions, a terrifically effective diff, abundant grip and no torque-steer leaves you with one of the purest and least corrupted front-drive helms ever.