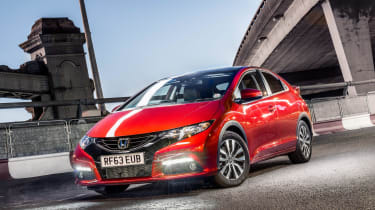 Two petrol choices and a single diesel offering make up the Civic range, if we’re ignoring the Type R. Gearbox choice is limited to just two, the 1.4 petrol and 1.6-litre diesel only offered with six-speed manual transmissions, while the 1.8 petrol comes with either that same six-speed manual or an optional five-speed automatic. Elsewhere in the Honda range the 1.6-litre i-DTEC turbodiesel is mated to a nine-speed automatic, but it’s yet to be offered in the Civic.

The diesel engine is a typically Honda affair, it feeling over-engineered compared to its rivals. There are two turbos working in sequence, which allows for a greater spread of power and torque, and largely eliminates the all-or-nothing delivery that characterises so many of the Civic’s turbodiesel competitors. The lack of an auto on the diesel isn’t an issue, particularly as the six-speed manual offers a crisp, precise shift, while the clutch is well weighted and positioned. The Civic’s manual shift is among the best there is in the family hatchback segment.