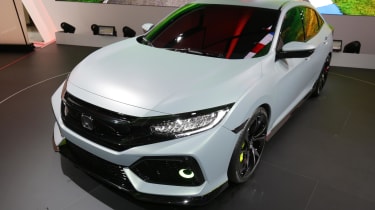 Longer, lower and wider than the existing Civic, the Civic Hatchback Prototype unveiled at Geneva gives us strong clues to the look of the new tenth-generation car due early next year.

It’s also the first truly global Civic in several model generations, with a consistent design across the American, European and Asian markets and – in Honda of the UK Manufacturing in Swindon – a factory that will manufacture for those global markets.

While billed as a ‘Prototype’ the car you see here shouldn’t change a great deal by the time it reaches the road – though some of the more outlandish details, including the large alloy wheels and dayglo green details will probably fall by the wayside.

The car is production-ready enough that Honda has already announced its engine range though. While no Type-R model has been confirmed, UK cars will feature a range of three powerplants – 1.0-litre and 1.5-litre VTEC turbocharged petrol units, and a revised version of Honda’s ultra-frugal 1.6-litre i-DTEC diesel.

Power, economy and emissions data hasn’t yet been revealed, but there should be improvements over existing Civic models. 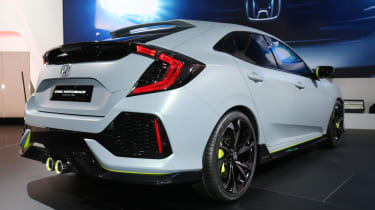 Dramatic styling though is a certainty. At 30mm wider, 20mm lower and 130mm longer than the existing, ninth-generation Civic five-door, the new car’s proportions have changed significantly.

While the look is similar to the Civic four-door saloon and two-door coupe recently launched in America, the Civic’s designer - Daisuke Tsutamori – told evo that the car’s form and details had actually been inspired by the European market.

‘In recent years we’ve observed that it’s quite essential to follow European requirements and standards, not just for behaviour and characteristics, but also in terms of exterior design’ he said, adding that the success of Europe’s premium manufacturers in particular has brought about the paradigm shift. ‘We followed European requirements to develop a global car’.

Tsutamori-san also told us that the five-door sold in Europe is deliberately the sportiest of the three current body styles. At the same time, the car’s proportions belie the Civic’s all-new platform, which was required to meet the firm’s dynamic demands.

‘It’s a very aggressive, sporty and sophisticated look’ Tsutamori told evo. ‘The rear view is my favourite – it has something provocative about it, like the car is saying “follow me if you can”’.

Find all the latest Geneva news, videos and images in our Geneva motor show hub.