Honda e 2020 review – does the funk override the flaws?

Honda’s new electric car is fun to drive and bursting with personality, but low range may deter some 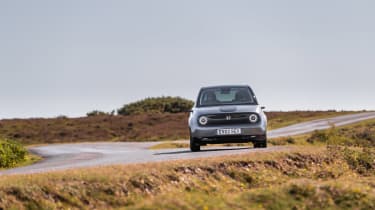 The expense of electric vehicle technology has so far meant that the most appealing and innovative vehicles have been towards the top end of the market, with those lower down often derivatives of regular production cars, toned down so as not to deter buyers who may be sitting on the fence.

With EVs trickling down to more affordable segments though, some are seeing value in offering products that would be desirable regardless of powertrain. Perhaps the best example yet is the new Honda e, which packs more personality than any other car in its class and features an interior layout unlike anything else on the road. 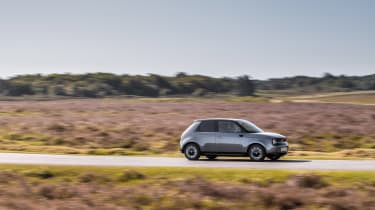 It’s compact, it’s expensive, and it has a lower range than many rivals, but if Honda has played its cards right buyers could overlook all those things simply to put one on the drive. But does it also offer driver appeal?

The Honda e is available with two power outputs, the entry car delivering 100kW from its rear-mounted electric motor, and the e Advance 113kW, with both developing the same 232lb ft of torque. Like many electric vehicles, the car’s gearbox is essentially a reduction gear system designed to turn high motor speeds into something more appropriate at the wheels.

The combination delivers brisk, if not class-leading acceleration: 0-62mph takes nine seconds flat in the regular car and eight seconds in the Advance, with a top speed of 100mph for both. Both Es use the same low-mounted battery pack too, with 35.5kWh of capacity (though useable capacity will be a touch lower), with a WLTP combined range of 137 miles, or 131 miles on the 17-inch wheels of our Advance test car.

If that sounds a little low, you’d be right. Honda says it’s deliberate: a big battery pack means more weight and lower efficiency, which may not be appropriate to what customers actually use, but several rivals manage to pack bigger batteries into a similar footprint. Charge from a conventional home wall box and a zero-to-100 per cent fill takes three-and-a-half hours, though using fast chargers such as those at motorway service stations, Honda claims a battery with just ten per cent charge can be boosted to 80 per cent in 30 minutes. 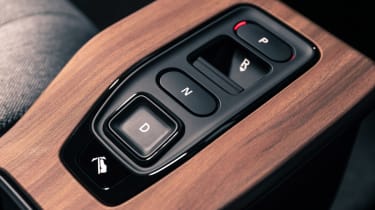 The e is an all-new platform for Honda, rather than a reinterpretation of an existing model such as the Jazz. The emphasis has been placed on interior volume, maximising wheelbase length, minimising the turning circle given its urban intentions, and placing the battery low and flat in the chassis, the last of those increasingly being the case in dedicated electric vehicles.

The structure is a steel monocoque with space-efficient MacPherson struts at all four corners, but the killer app is the rear-mounted motor placement, which much like with the current Smart fortwo and forfour has worked wonders for the e’s steering geometry. The front wheels can turn up to 50 degrees, facilitating a turning radius of 4.3 metres at the wheels, or a full U-turn in 8.6m kerb to kerb. A Honda Jazz, for reference, has a minimum turning circle of 10.1m, and it’s hardly a supertanker itself.

The downside of the rear motor placement, and the emphasis on passenger space, is a fairly pokey boot of 171 litres – though pitched as an urban vehicle, that may not be a huge issue for buyers. Another downside, at least for those of us at evo, is the effect batteries have on weight. While a hybrid Jazz is as little as 1228kg (itself no lightweight), the E ranges from 1525 to 1555kg.

User technology was another priority of the e, and it has heavily dictated the dashboard layout. There are fully six screens in front of you – one instrument display, a pair of 12.3-inch touchscreens for driver and passenger, a pair of smaller screens relaying images from another of the e’s unique touches, the exterior camera mirrors, and finally the central rear-view mirror is also a screen. There are numerous ports for connecting various devices too, from power sockets to HDMI ports and the usual USB interfaces. 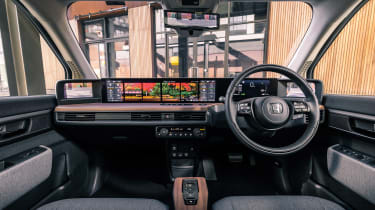 Forget about driving for a second – simply as a place to sit, the Honda e is probably one of the most remarkable and appealing cars on the road. Like BMW with its i3, Honda has aimed for a lounge-like atmosphere, and has arguably been even more successful, with a warmer, less technical feel than in the German car.

Most cars mix elephant-arse plastic textures with materials such as Alcantara and aluminium and carbonfibre, which would be ridiculous things to fill a house with and aren’t much better in many cars, but the Honda’s textured fabrics, matt-finish wood and minimalist fittings are as tasteful as they are effectively implemented. It feels special, and goes a long way to justifying the car’s price.

Those screens, then. Potentially a recipe for disaster, but pretty good in practice. Being able to change the wallpaper or have fish swimming around on screen is a little gimmicky, but still preferable to the first-year BA computer graphics projects that most manufacturers use. 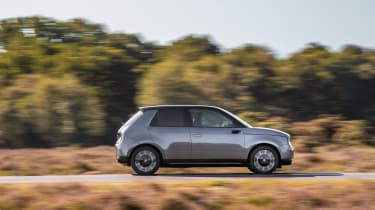 Honda’s mix of physical controls (heating and ventilation, volume knob, home button) is sensibly meshed with large, clear on-screen buttons that are easy to prod on the move, in part thanks to that wood-effect trim serving as a handy platform to steady your hand. The camera mirrors are surprisingly easy to get used to, but the digital rear-view is more of an acquired taste – it can be turned off to serve as a conventional mirror, but if it’s left on it still needs adjustment to avoid reflections distracting you from the digital image.

When you do stop cooing in delight at the interior fixtures the e feels good on the road too. It’s quiet, of course, and you’d struggle to get bored with turning around in what feels like the vehicle’s own length, while the electric motor has the same linearity and response you’d expect of any electric vehicle.

The e offers one-pedal driving, selectable with a switch on the park/reverse/drive panel, and it’ll probably become the default for most drivers. Maximum deceleration of 0.2g means barely ever touching the brakes in normal driving, and it’ll pull right to a halt, albeit slightly abruptly over the final few mph.

On the move this mode gives you a little extra ‘drag’ underfoot (basically, backing off the pedal at more or less any speed introduces more regenerative braking) but this means slowing down is very intuitive. And speeding up again is entertaining – the Advance-spec car’s eight-second 0-62mph time is quick on its own, and you’ll catch almost anything napping away from the lights if you mat it. Thrust begins to tail off around 60 or 70mph, but there’s still decent acceleration available at motorway speeds. Interestingly, Honda has avoided piping in a synthetic sound to accompany acceleration, so quick driving is close to silent aside from some road noise. 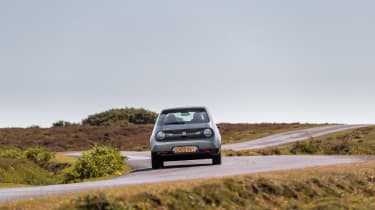 Does it feel rear-wheel drive? Not particularly, though accelerate hard through a corner and it definitely doesn’t feel front-drive either, because there’s no torque steer, just clean, brisk acceleration. Given low enough grip (a gravel driveway on the car’s launch location, for instance) the rear-drive nature becomes apparent, but the electronics minimise attempts to lark around.

It’s good fun, even so. Advance models get 17-inch alloy wheels wrapped in Michelin Pilot Sport 4 S tyres, which are surprisingly racy for a city-focused EV, and combined with accurate, pleasantly weighted and uncorrupted steering the E has a keen front end and good lateral grip, if not the apex-hunting bite of a conventional sporty hatch such as a Fiesta ST-Line or lightweight agility of a Swift Sport.

The e rides fairly well too. Certain bumps can feel a bit sudden, a trade-off for the car’s relatively high weight and decent body control, but otherwise it’s smooth without being floaty and the structure feels admirably stiff, adding to the quality, tightly constructed feel of the cabin. 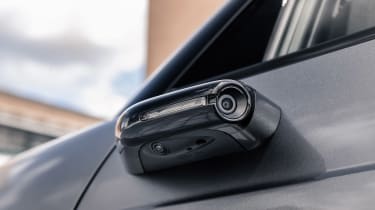 In basic form the Honda e starts at £26,660, with the E Advance tested here coming in at £29,160 (each including the UK low-emissions vehicle grant). If you’re used to the price of more familiar evo cars then you’ll be well aware that nearly £30,000 is deep within the hot hatchback ballpark, while similarly sized cars to the e (such as the Fiesta ST) can cost a lot less, but that’s all a bit apples to oranges.

Our sister site Driving Electric notes that buying an e on finance is roughly equivalent to purchasing its closest rivals, such as the Renault Zoe, Peugeot e-208, Vauxhall Corsa-e and the new Mini Electric, though costs a little more than them to insure. The Mini is probably the sportiest of the bunch to drive too, though the Honda has the sweeter steering.

If there’s one area the Honda does lose out, it’s range. When a Zoe will go up to 245 miles on a charge, Honda has some work to do to convince buyers that the e is the right car for them, even if it’s comfortably the most desirable small EV on sale right now.