Another one of our favourite hot hatchbacks is getting a refresh, the 2020 i30 N is on the way 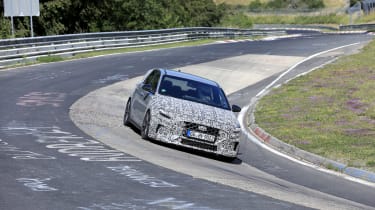 In many (many) ways, the immortal words of Frank Sinatra’s ‘it was a very good year’ will not apply in 2020, but if there is a positive to take from a year of misery, it’s the sheer amount of new or updated hot hatchbacks for us to enjoy.

Volkswagen, SEAT, Honda, Toyota, and others have either updated or revolutionised their hot hatchback game, and as we get into the second half of the year, Hyundai’s getting in on the act with a substantial update to the i30 N. The current i30 N has been a firm evo favourite since its release in 2017 and we’re hoping the aesthetic, tech and mechanical updates will only make it better. 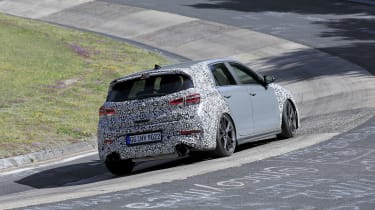 Spied here in final calibration testing, this prototype now features all of the elements expected on the production model, some of which we can see, and others we can’t. The bulk of the i30 N’s changes will be those already seen on the standard i30, so expect some new LED lighting front and rear, new bumpers, interior tech and efficiency improvements to be brought across.

What N-specific upgrades are coming remains more of an unknown, but from the prototype spied in these images we can see a new wheel design, defined by slim spokes and a possible size change from the previous 19-inch set. The exhaust outlets also look bigger, with thinner walls to the tips. The N’s now trademark upright rear wing, triangular third brake light and grey lowers to the bumpers all look to remain behind the body-shrouding camouflage, too. 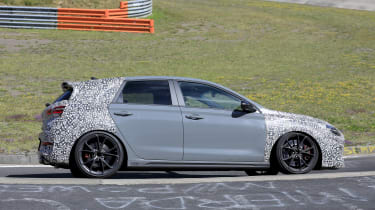 Inside, as with the standard i30, we expect to see an infotainment update to a much wider 10-inch touchscreen with hard keys lining the display underneath. Standard i30 models have also gained a new driver’s information display with two half-size physical dials either side, but we hope the previous model’s clear and almost BMW M-like (during the good years) dial pack remains.

Hyundai’s ‘Theta’ 2-litre turbocharged four-cylinder will stay put, however we don’t know whether the new regular i30’s 48V mild hybrid systems will be applied in an attempt to improve the i30 N’s relative thirst. In addition to the usual six-speed manual will be a new eight-speed dual-clutch transmission, designed specifically for the new i30 N and other high performance models coming from Hyundai.

Changes are also afoot in the wider N range as this revised i30 N will be joined by not one, but two new N models in the form of the new i20 N and the Kona N. These cars will transform Hyundai N from what has, in Europe, been less of a brand and more of an outlier in Hyundai’s range. After the superb effort it made with the i30 N the first time around, there are few more anticipated new models in 2020. Maybe the year won’t be so bad after all. 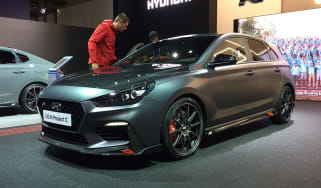