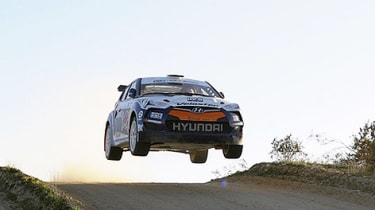 Teaser shots of a rally-prepared Veloster in full airborne pose have been released by Hyundai. Barely a month on from unveiling the three-door Veloster (three-and-a-half doors if you include the suicide rear passenger door) at the Detroit Auto Show, Hyundai has hinted at its motorsport ambitions with these dramatic photos of a Red Bull liveried car. The Korean manufacturer has not provided any information to go with the pictures, but is set to release full details of the rally car at this week’s Chicago Auto Show on 9 February. The Veloster, Hyundai’s first all-new coupe since 2002, is rumoured to be getting a 1.6 litre blown four-cylinder unit developing 208bhp in range-topping tune. Driving the wheels will be a choice of six-speed manual or Hyundai’s first twin-clutch auto gearbox. Lower down the range, a normally aspirated 1.6-litre four unit will be offered, with a less potent 130bhp on offer from the direct ignition ‘GDI’ unit. When it goes on sale, the Veloster looks set to take the fight directly to the Volkswagen Scirocco and the Renault Megane Coupe, pitching in around the £20k mark. It’s styling is particularly reminiscent of the French maker’s offering. Full UK specification and prices of the road-going version are due to be made public at March’s 2011 Geneva Motor Show.