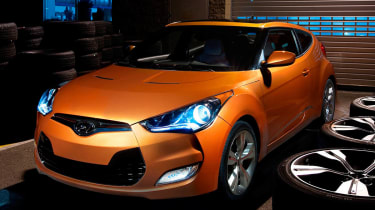 Hyundai has unveiled the Veloster coupe. It’s the firm’s first all-new small coupe in nearly a decade, and surely has the Volkswagen Scirocco and Renault Megane Coupe in its sights. It takes them on, though, with a neat party trick up its sleeve. Perhaps inspired by the ‘suicide door’ equipped Mazda RX-8, its passenger side boasts an extra, rear door. The driver's side, though is typically coupe-like with just a driver’s door. It ends up alike to the Mini Clubman in concept, then, with more gracious access to the rear of the car enabled on the passenger side. The rest of its design fits in well with Hyundai’s current, European-friendly look. The large wrap-around headlights, bonnet vents and bulging wheel arches help make it a bold addition to the small coupe class, and one inspired by Hyundai’s 2007 Veloster concept. The stubby rear end is sure to make it a more practical offering than its predecessor, the Hyundai Coupe. The dramatic styling continues back here too - elongated rear light cluster alcoves and a twin centre exhaust ensure that the Veloster is more dramatic than a typical hatchback. The Veloster also showcases the Korean firm’s first double-clutch gearbox, a six-speed transmission which is linked to a new, more efficient 130bhp 1.6-litre four-cylinder petrol engin dubbed ‘GDI’.