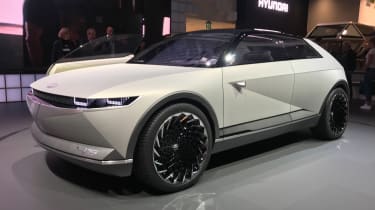 Hyundai has pulled the wraps off its 45 Concept that had been glimpsed in a series of teaser images prior to the Frankfurt motor show. Rather than previewing a new production model, Hyundai says the 45 demonstrates the way its electric vehicles will look in the future. The Korean company states the 45 pays homage to ‘one of the most iconic vehicles in Hyundai’s history, the Pony Coupe Concept’ that, in somewhat watered-down form, became the Pony, the first car designed and manufactured by the company.

As well as celebrating the 45th anniversary of the Pony, Hyundai also says the 45’s name was inspired by the 45-degree angles front and rear, forming a diamond-shaped silhouette which further showcases the design direction of the company’s EVs of the future. Once past the press release piffle – ‘the 45 incorporates the evolution of Hyundai’s Sensuous Sportiness design language’ – the latest concept certainly is a striking-looking machine, with strong horizontal design lines, wide wheelarches and a Z-shaped flourish along its flanks.

Both the front and rear aspects are very clean in their look, with few typical concept car embellishments, although the front ‘grille’ and headlights picked out with LEDs are said to evoke thoughts of the original concept’s frontal treatment. Meanwhile the rear end features a similar design with an array of LEDs to take care of lighting functions and with a suitably retro offset Hyundai badge. If you’re struggling to envisage the scale of the 45, bear in mind those stylised wheels are 22 inches in diameter wearing 295/40 aspect tyres. 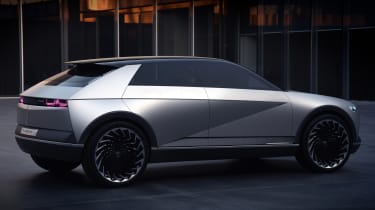 The concept eschews normal door apertures in favour of a brace of sliding items each side which Hyundai calls a ‘dynamic daylight opening’. The cockpit is said to embody Hyundai’s ‘Style Set Free’ strategy that emphasises personalisation of design and function and takes the space beyond driving to focus on the vehicle’s evolution into a living space – hence the swivel chairs inspired by home furnishings.

Inside there’s a combination of wood, leather and fabrics, and while it might not appear to be an overwhelmingly driver-focused set up, it is clean and uncluttered. There’s a large display screen that sweeps across the dash, and this is further enhanced by a series of screens that are integrated into the dash’s structure. Front seat passengers can interact with the infotainment system via a ‘projection-beam interface’. Very space age. 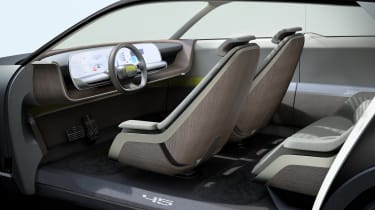 Hyundai hasn’t provided any information of what type of batteries or electric motors are envisaged for the 45, or any projected performance or range figures, but like many electric cars the batteries and motors are positioned under the passenger compartment floor in what Hyundai terms its ‘skateboard floor’ to allow for a more spacious interior compartment. It also incorporates a neat LED display on the car’s sill which instantly allows the driver to see the current state of charge of the 45 before embarking on a journey.

Ultimately, Hyundai’s 45 Concept is an interesting showcase for its future design direction and we certainly like the way it looks. Marry some of this style with the entertainment provided by machinery such as the i30 N and we’d be on board with Hyundai’s EV intentions.