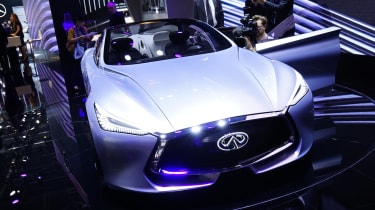 Nissan’s luxury arm Infiniti is still a company attempting to define itself in a market saturated by German brands and its closest competitor, Lexus.

With the Q80 Inspiration concept making its debut at the Paris Motor Show, the firm describes its vision of a ‘category-breaking, supremely luxurious, top-of-the-line’ vehicle that ‘rises above the crowd’.

If that isn’t an attempt to define itself we’re not sure what is, but as is often the way with design exercises Infiniti promises the Q80 Inspiration will influence the look of future products.

The Inspiration concept takes the form of an imposing five-door fastback, 5052mm in length and over two metres wide. That, and its 3103mm wheelbase, give it a longer and wider stance than Audi’s segment-defining fastback, the A7. It’s lower too at 1350mm, so the Q80 should have plenty of visual impact on the motor show turntable.

Styling cues echo those of other recent Infiniti models but designers have deliberately eschewed the use of door mirrors to ensure a sleeker form. The teardrop-style roof is formed from a single pane of lightweight acoustic glass and the concept’s doors open ‘portal style’ to reveal a ‘1 + 1 + 1 + 1’ interior seating layout. That’s four seats, in more traditional parlance…

Interior materials include carbon fibre, aluminium and leather, and Infiniti has ensured the flowing body encloses an advanced ‘driver-centric’ drivetrain. The firm hasn’t revealed many details, but adaptive suspension should feature on the concept.

‘In Q80 Inspiration, we wanted to capture that unforgettable feeling when you experience something important, something beautiful, something magnetic for the first time’ said Executive Design Director Alfonso Albaisa of the concept’s design.

The Infiniti Q80 Inspiration concept will make its worldwide debut at the Paris Motor Show on October 2.