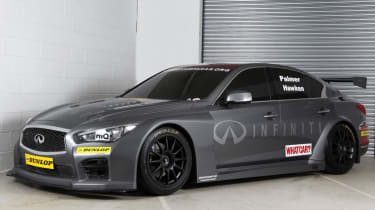 Infiniti has announced it’ll be joining the BTCC in 2015 with a race-prepped Q50. Partnered with Support Our Paras, the new outfit will field two drivers, Richard Hawken and Derek Palmer Jr in the 30 round championship.

Palmer’s father, Derek Sr, will head Infiniti Support Our Paras Racing, which has chosen the newly refurbished Mallory Park as its Leicestershire headquarters. The cars will be prepped and maintained by a number of injured paratroopers on location, utilising the recently re-opened race circuit’s motorsport facilities.

Inifniti added: ‘The team aim’s to specifically help raise awareness and funds for Support Our Paras, the official charity of The Parachute Regiment, one of the most iconic Regiments in the British army.’

The team will even promote injured paratroopers through its ranks to drive Infiniti Support Our Paras Racing cars in the future, with hopes to eventually field three cars in the championship.

No doubt the brand’s involvement will help boost its profile in the UK too, a market it is still only just beginning to crack with involvement with Red Bull F1 and a string of advertising campaigns.

Though Infiniti is yet to release details of the car, due to BTCC rules the GT-R based twin-turbo V6 from the most extreme road-going Q50 – the Eau Rouge concept – unfortunately won’t make an appearance. Instead a heavily regulated turbocharged 2-litre conforming to NGTC regs will be fitted, sending over 300bhp to the Q50’s rear-wheels through a six-speed sequential ‘box.

Initially Pro Motorsport will prepare the chassis, whilst Infiniti will directly supply the body shell and panels. The car is set to make its first on track appearance at the end of 2014, before making its race debut at Brands Hatch for Round 1 of the 2015 season on April 4.