Infiniti has applied a mild facelift to the Q70, the big saloon in the range. Details, prices and pictures here 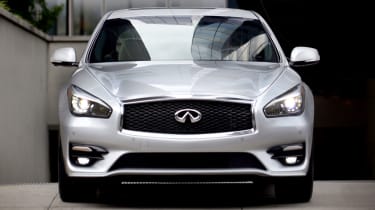 Infiniti has confirmed the engine line up and pricing for its updated Q70 saloon, the car that made its European debut at the 2014 Paris Motor Show. The Q70, formerly known as the Infiniti M in the UK, has received a raft of exterior changes to bring its appearance into line with the smaller Q50, and will sit above the forthcoming Q60 (teased in concept form here) in the range.

Outside, new front and rear bumpers feature sharper angles, whilst the headlights now gain LEDs as standard. The grille has also been redesigned to fall more into line with the Q50, featuring a crosshatch centre and chrome surround.

Tech features include smartphone connectivity, the Around View Monitor that provides a 360 degree view around the car to improve vision and help with parking, and several 12V outlets placed across the cabin and boot.

Under the bonnet will be a choice of three powerplants, the first of which being a 164bhp 2.2-litre turbo-diesel four-pot with start/stop. Producing 295lb ft of torque from just 1600rpm, the turbo diesel is expected to be the biggest seller in Europe.

Two V6 petrols are also available: a 3.7-litre unit producing 315bhp and 265lb ft and a 3.5 hybrid. The latter offers the best performance with 359bhp and 403lb ft of torque, enabling a 5.3sec 0-62 time and 145g/km of CO2 output. It'll also be able to travel on pure electric power thanks to its dual clutch system that can disengage the petrol engine.

Despite sluggish sales from the now defunct M, the Q70 follows at a time when the Infiniti brand is beginning to gain recognition in the UK market. Prices start at £32,650 for an entry level Premium spec diesel and rise above £40,000 for range toppers. Deliveries of first cars are expected in January 2015.