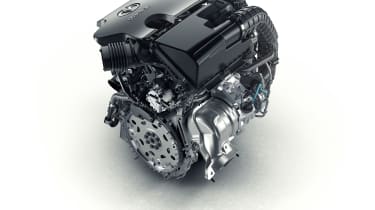 It’s the result of more than 20 years of development at Infiniti. VC-T, for Variable Compression-Turbocharged, can raise or lower the stroke of the pistons allowing the compression ratio to vary between 8:1 and 14:1 – providing performance benefits at low compression and efficiency improvements at high compression.

The engine’s control logic electronics vary the compression ratio depending on the driving situation. An actuator arm works on a control shaft to change the position of a multi-link around the crankshaft, raising and lowering the height the piston can reach in the cylinder. 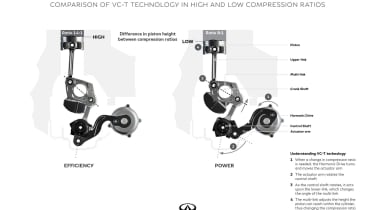 Infiniti calls it ‘a revolutionary next-step in optimising the efficiency of the internal combustion engine’ – though it’s also illustrative of the lengths manufacturers are now going to in an effort to extend the abilities of such engines, in light of tougher emissions regulations and customer performance demands.

With low-hanging fruit such as direct injection, turbocharging, efficient transmissions and more already pushed to their limits, improvements in combustion power are likely to come in ever more elaborate forms.

Infiniti will reveal further details of the VC-T engine at the Paris motor show on September 29.