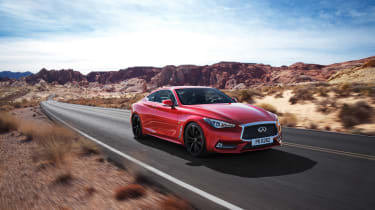 Infiniti has announced pricing for the upcoming Q60 coupe, which goes on sale in Europe in October.

Based on the Q50 saloon and set to rival the Lexus RC, BMW 4-series and Audi A5, the entry-level 2-litre turbocharged four-cylinder model will begin at £33,990.

Quicker still will be the models equipped with Infiniti’s ‘VR30’ 3-litre twin-turbocharged V6 – a unit from the same engine family as the VR38 in the Nissan GT-R. Overseas it will be available in 300bhp and 400bhp outputs but UK buyers will get the latter option.

As standard, drive is sent to the rear wheels, though a rear-biased all-wheel drive system is also available. Infiniti claims a balance of ride and handling with its chassis setup, with Dynamic Digital Suspension, which uses electrically-adjustable dampers and a selection of driving modes to tailor the car’s handling to the driver’s needs.

Infiniti’s Dynamic Adaptive Steering, a steer-by-wire system now in its second generation, will also feature on the Q60. Claims of a “high level of steering feel” are yet to be verified, but it will be vital for the Q60’s aspirations as a driver’s car.

Full pricing and specification for the UK market are yet to be confirmed.