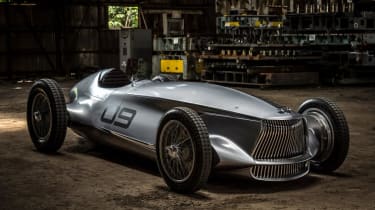 After a coy teaser earlier in the week, Infiniti’s retro prototype has just been revealed in full and is called the Prototype 9. Presented with contrasting themes of an old-world racing car built in a contemporary context, the concept has a very specific, but reasonably ideological reason behind it.

Built in the style of a ‘40s or ‘50s racing car, the Project 9 has been revealed bearing an electric drivetrain reportedly based on the upcoming all-new Nissan Leaf. A 30kWh high-voltage battery is paired up with a new electric motor, developing 148bhp and 320nm of torque.

> Click here for our review of the Infiniti Q50 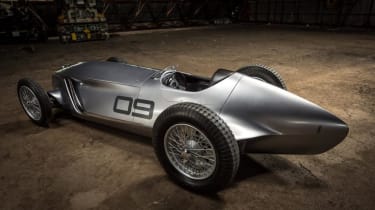 If you were worried that those figures sound a little weak fear not, as a lithe kerb-weight allows the Project 9 to hit 62mph in just 5.5 seconds and hit a top speed of 106mph.

Meant to be a retrospective look at what a historic racing car by Infiniti might have looked like, the concept is more a look into where Infiniti wants to place itself within the premium brand marketplace.

Regardless of the little relevance concept cars like this actually have to the sales performance of Infinitis in showrooms, it does give us an clue to how serious Nissan is about offering up Infiniti as a true global luxury brand.