Infiniti Q50 review - can Infiniti compete with the big players in the executive car market?

The Q50 is well built and distinctive, but its driving dynamics are way off those of the class leaders and its steering saps confidence 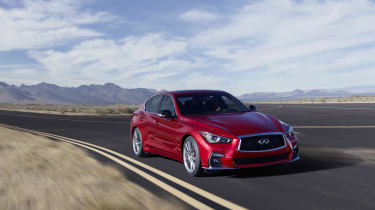 The Infiniti Q50 has a big following in the USA, where it trades blows in the sales charts with the BMW 3-series and Mercedes C-class. Over here in the UK, however, the four-door saloon has essentially sunk without a trace in the four years since making its debut.

So in an effort to give its compact executive a second chance, Infiniti has treated the Q50 a mid-life refresh. Crucially, this extends to the flagship Sport model, which goes toe-to-toe with talented machines such as the Audi S4 and Mercedes-AMG C 43.

On paper, the Q50 has these models comfortably covered, thanks to a twin turbo V6 that pumps out 399bhp and 350 lb ft of torque. 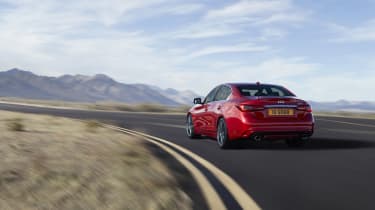 Externally, the changes are subtle, with the reprofiled front and rear bumpers being the biggest clues to the car’s updated status.

Inside, there are some new trim materials and enhanced connectivity for the confusing, dual screen infotainment systems. There’s also more standard kit than you’ll find in your average Mercedes S-class, with a dazzling array of hi-tech driver aids and features.

However, there’s a price to pay for this kit and caboodle, with the standard Q50 Sport setting you back £42,000, and the Sport Tech tested here costing a bank manager baiting £47,020.

While the Q50’s front-engined and rear-wheel drive recipe is fairly straightforward, its steering set-up is anything but.

Called Direct Adaptive Steering, it’s essentially a drive-by-wire system that does away with a mechanical link between the steering wheel and the rack – although the traditional column and mechanical linkage remains as an emergency back-up.

Instead, it uses sensors on the steering wheel that send messages to the rack, which then turns the road wheels remotely. Not only does this set-up promise sharper responses, it allows easier integration of semi-autonomous systems, such as the Active Lane Control. This piece of kit prevents you from wandering outside the white lines, plus it also attempts to compensate for crosswinds and bumps that might deflect the car off course. 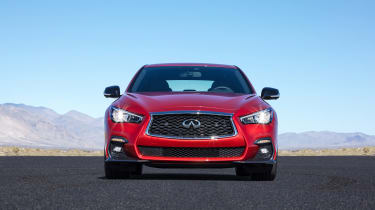 Another neat trick is the ability to vary the ratio, quickening the rack at low speed for greater manoeuvrability, but slowing it to boost stability as the car goes faster.

Also standard on the 3.0t V6 S model tested here is the Digital Suspension system. Effectively this adds adaptive dampers to the set-up, which comprises a promising layout of double wishbones at the front and a multi-link rear axle.  There’s a choice of standard and sport modes, the latter firming the dampers for reduced roll and tighter body control.

When it comes to bar room bragging rights, the twin-turbocharged Infiniti has the upper hand against the Mercedes-AMG C43 and Audi S4. With a heady 399bhp at 6,400rpm, the 3.0-litre V6 is 50bhp up on the Audi and 37bhp ahead of the Mercedes.

Codenamed VR30DDT, the all-aluminium unit was launched in 2015 and is closely related to the larger 3.8-litre lump used in the Nissan GT-R. Stand out features include its electrically controlled inlet valve timing, direct injection and an integrated exhaust manifold.

This powerplant is mated to the firm’s tried and tested seven-speed transmission. It’s a traditional torque convertor unit, with manual selection of the ratios possible using either the lever or the large paddles mounted on the steering wheel. 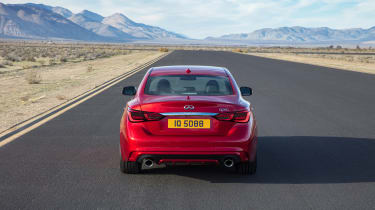 On this Sport model drive is to the rear wheels only – if you want four-wheel drive like the S4 and C43 then you’ll have to settle for the petrol/electric hybrid Q50, which can only muster 302bhp. Curiously, there’s no limited slip differential, not even as an option. Given the amount of power and torque on offer, this seems like a strange omission.

Just as strange is the fact that the Q50 isn’t as fast as its on paper potential suggests. For instance, Infiniti claims S will sprint from 0-62mph in 5.1 seconds. By comparison both the Mercedes-AMG C43 and Audi S4 cover the same increment in just 4.7 seconds.

It’s hard to sum up the Q50 driving experience without resorting to the word ‘awful’. In fairness, the main culprit of the car’s mediocrity is the steering, which is inconsistent and poorly calibrated – after a handful of corners you’ll be wishing the Romans were still in charge of road building.

> Read all our Infiniti news here

At low speed the set-up’s not a problem, as the variable ratio means you can go from lock to lock in less than a full turn of the wheel. And while there’s no real feedback, it’s light enough to make parking a doddle. Up the pace a little, however, and the system starts to unravel.

You can alter the weighting using the driving modes, but none of the settings deliver any meaningful feedback. Worse still is the strange disconnect between your instructions through the wheel and the car’s response, particularly through a change of direction where the wheels are asked to go from one lock to the other. Here there’s a tiny but critical delay in the time between turning steering and the front axle responding. To make matters worse, the Q50’s electronic brain seemingly panics and applies lock more quickly than you’ve asked as it attempts make up for its initial sluggishness. The knock on effect of this is that the car turns more sharply than you intended, which overwhelms the rear tyres and causes a scrappy exit as the inside rear wheel starts spinning, before being abruptly reigned in by the traction control. 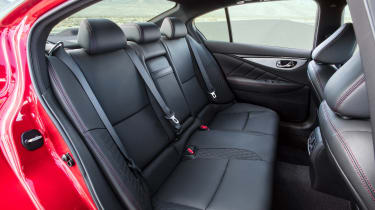 It all combines to make for a car that’s difficult to place accurately on the road and quickly dents driver confidence.

Even in a straight line, the steering delivers odd sensations. With the wheel held stock-still you can feel the front of the car move about as the rack works independently to stop the car being deflected by bumps and gusts of wind. It’s unnerving to say the least.

Unfortunately, it’s not as if the wayward steering is spoiling an otherwise excellent chassis. The damping is firm, even with the suspension in its softest setting, meaning the Q50 constantly fidgets. Only on the smoothest motorway sections does it settle.

There’s not very much traction, either. Even in the dry and with modest throttle openings the ESP light will flicker on. Push harder on typically rutted British roads and the fierce battle between the engine and the electronic safety net delivers a sensation that’s similar to the axle tramp you get with a live rear axle. It’s hardly in keeping with the car’s sophisticated image. 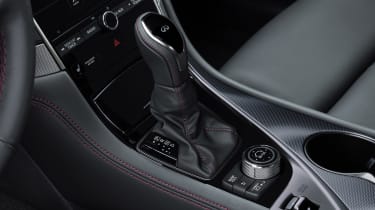 It’s not all bad news, though, because the 3.0-litre V6 pulls strongly and smoothly, emitting a muted growl as the revs build. It trails the Audi and Merc for outright pace, but on give-and-take roads the differences are hard to detect – this is a genuinely quick car. And while the seven-speed auto’s gear changes are a little tardy when its left to its own devices, it responds crisply enough to the tactile magnesium paddles.

However, our Sport Tech test car is listed at an eye-watering £47,020. The extra £5,000 over the standard car is accounted for by the extra autonomous driving aids, a surround view camera and powerful Bose sound system.