Built by Jaguar Classic, this no-expense-spared commission is an unexpected star of the 2018 Geneva show 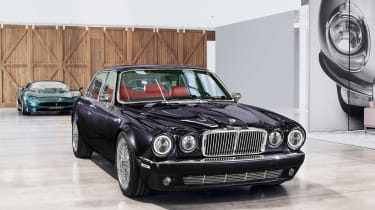 Jaguar has kicked off the 50th anniversary celebrations if its legendary XJ6 saloon with this special one-off model built by the brand’s Classic division. Commissioned by Iron Maiden drummer Nicko McBrain and unveiled at this year’s Geneva Motor Show, the Greatest Hits model is based on a 1984 Series 3 model.

The result of over 3500 hours of work, the bespoke saloon features modified bodywork, interior and suspension, plus a rebuilt and subtly tweaked engine. Finished in a distinctive metallic mauve with contrasting chrome trim, the XJ6 features subtly widened wheelarches that cover 18-inch wire wheels that are wrapped in modern Pirelli P Zero rubber. Other visual upgrades include the addition of LED headlamps with distinctive ‘halo’ running lights, reprofiled rear door skins and some chrome bullet door mirrors.

> Click here for our live coverage of the Geneva show

Even more care has been taken with the interior, which features red leather trim for the seats, black Alcantara headlining and dark sycamore veneers for the dashboard. Other unique parts include the metal rotary switchgear that’s modeled on the controls of a Marshall amplifier, plus pedals that take their cues from those used on drum kits. There’s also a traditional three-spoke sports steering wheel. 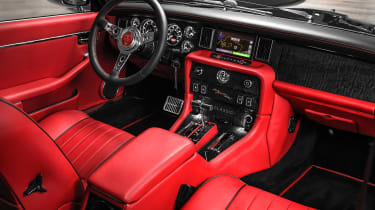 It’s not all olde-world charm and rock and roll excess, because the cabin also hides some cutting edge kit. For starters, the door seals have been replaced by modern items for greater refinement, while the air-conditioning system has also been upgraded. There’s also remote central locking, plus the touchscreen sat-nav, infotainment and reversing camera set up from a 2012 Jaguar XF. Finally, and in keeping with the owner’s profession, the XJ6 packs an 1100W sound system.