Jethro Bovingdon is at Blyton Park to see whether the Jaguar F-type is quicker than a Triumph Street Triple R over a flying lap. Video here 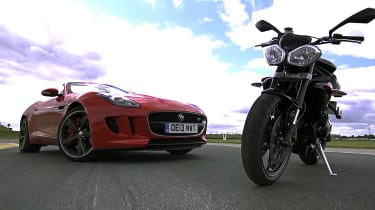 Two wheels or four? The debate among petrolheads is fiercer even than that for Scottish independence but with speed as in politics, there can be only one winner. evo has teamed up with motorbike experts Bike Social, to find out once and for all which has the edge on track.

The relative performance of Jaguar’s raspy F-type V6 S and the Triumph Street Triple R probably won’t have as much bearing on the country’s future, but the winner can still claim a healthy slice of British pride.

Initially, the Jaguar appears to have the advantage. It has a wider contact patch on the ground, for better traction, cornering grip and adhesion under braking. As well as the obvious differences in rolling stock, the Triumph also has half the number of cylinders of the Jaguar, and 675cc to the F-type’s 2,995ccs.

Atmospheric aspiration plays a supercharger, the two-wheeler’s typical six-speed sequential faces up to the Jaguar’s eight-speed ZF automatic and at 105bhp, the Triumph lags the Jag by a full 270 horses.

Power though is only part of the equation. Fully fueled the Street Triple R tips the scales at just 182kg, against the F-type’s surprisingly lardy 1,614kg, less than one ninth the weight. The weight difference is most apparent in the bare figures, where the Triumph shaves a full 1.8 seconds from the F-type’s 4.8-second 0-60mph sprint.

How does that translate on the track? Can power and grip overcome weight or will the lithe Triumph… triumph? Watch our car v bike battle to find out.