Thought the F-type Convertible would make a good rally car..? Nor us... 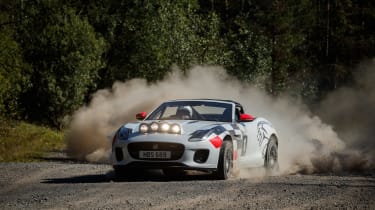 As part of Jaguar’s 70 years of sports cars celebration this year, the British marque has designed and built two F-type roadster models to go off the tarmac and onto the rally stage.

Based on the F-type Convertible, both models are fitted with the entry-level 296bhp four-cylinder petrol engine, matched to the standard-fit eight-speed automatic gearbox. From here, further modifications are undertaken by Jaguar Design and Engineering, with an internal roll-cage fitted to FIA specification, alongside racing bucket seats and six-point harnesses. Stark carbonfibre door cards have also replaced the standard items, a necessary move in order to fit the cage.

> Click here for our review of the Jaguar F-Type

Under the aluminium body, Jaguar has also fitted new, more resilient brakes, and a lifted suspension set-up with hand-made competition-spec dampers, allowing the F-type to glide over the rutted gravel roads of a rally stage. New dampers also have the capability to offer three modes to add further control to the damping, depending on the terrain.

Natty motorsport-spec wheels and gravel tyres have also been fitted, as well as a hydraulic handbrake, replacing the standard electric unit, and a limited-slip diff to best help the still rear-wheel-drive model with traction on rough surfaces. Why Jaguar didn’t start with an all-wheel-drive F-type variant, we’re not sure, but the sideways gravel shots probably have something to do with it.

Coinciding with these two F-type rally cars are the special-edition Jaguar F-type ‘Checkered Flag’ models that were revealed a couple of weeks ago. Unlike those models, the F-type rally car will not be available to purchase, although we suspect it would be a spectacular, if not wildly successful, rally car if it was.