The Jaguar has a comedian's sense of timing. We'd promised the kids three days at Disneyland Paris in the last week of the school holidays and, because this would cost only slightly less than the national debt, the plan was to set off at dawn on the first day to catch an early shuttle. 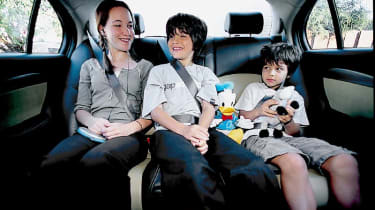 The Jaguar has a comedian's sense of timing. We'd promised the kids three days at Disneyland Paris in the last week of the school holidays and, because this would cost only slightly less than the national debt, the plan was to set off at dawn on the first day to catch an early shuttle.

So there we were, breezing down the M11 past Stansted at about 6am, kids chatting happily in the back when wheeuuurgh... No, not one of them rejecting their 5am bowl of Weetos, but the Jag suddenly and momentarily losing drive.

Now, apart from the central-locking plipper packing-up last month (they're known to be dicky and we've joined a long queue for replacements), the Jag has performed faultlessly for over 20,000 miles (and indeed had just had its 20K service). As I remarked to Mrs T in a witty fashion that would have had Oscar Wilde in raptures, what a ----ing great time to go wrong. As we pressed on, the jolts became more frequent, then a warning flashed up: gearbox fault. I pulled over, switched off, checked underneath that no fluids were leaking out, set off again. More lurching, and now another message: parking brake fault, and an amber warning light. We checked the handbook. Amber meant proceed with caution and consult a dealer asap.

Disinclined to wave goodbye to a third of our holiday, we decided to proceed. I figured that if we could just get aboard the shuttle, then at worst Jaguar's breakdown service would take us on to Disneyland. And indeed we made it to Folkestone, though by the time we were approaching the shuttle the Jag was providing a white-knuckle ride of its own, juddering and jolting through passport control like it had some guilty secret. As we edged onto the train it all but stalled - then jerked forward with a squeal from the rear tyres, fairly racing up the ramp. The last few centimetres as the steward urged me to park closer to the car in front were agony.

Another burst of wheelspin and a series of jolts saw us onto French soil and we lurched our way on to the autoroute. Then Mrs T found a page in the handbook relating to the parking brake warning; it recommended restarting the car while holding the parking brake switch and depressing the brake pedal. I also decided to try shifting manually. Not very scientific, but it did the trick. We covered the remaining two hours of autoroute without a hiccup. And I'm pleased to say we had a great time at Disneyland (though I wouldn't recommend the Peter Pan ride, because it's rubbish. Plus you get into an argument with some queue-jumping Spaniards, though my wife later told me this is optional).

Anyway, the Jag got us back to Blighty without further incident. Schmoozing back up the M11, I'd all but forgotten the earlier tribulations. Until... 20 miles from home the lurch was back. Since then the Jag has further blotted its copybook, first by virtually draining its battery, then by setting off its alarm, and finally by illuminating the engine warning light. I'm no expert, but I reckon it's Donald Ducked.

As I write, it's booked in to Guy Salmon Northampton in the morning, and I'm just hoping it gets me home tonight. Finally I'd just like to apologise again about the queue thing.