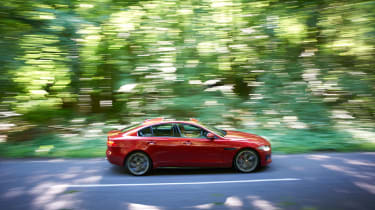 Jaguar abandoned the wood'n'leather gentleman's club vibe long ago, and the XE feels so far away from that ambience that it could have been created by a different manufacturer altogether. While there's nothing particularly wrong with the XE's cabin – if you ignore the InControl infotainment system at least, which still isn't on par with many rivals despite having been updated several times over the last few years – there's nothing that really marks it out as a Jaguar either.

Look closely and you'll spot the "Riva Hoop" that first saw service in the XJ, but in an otherwise conventional enviroment it doesn't particularly stand out like it does in the flagship saloon. What you do get is widespread piano black plastic and plenty of leather. We can't come up with many complaints when it comes to build quality or how switches and controls operate, but the basic design is fairly uninspiring. 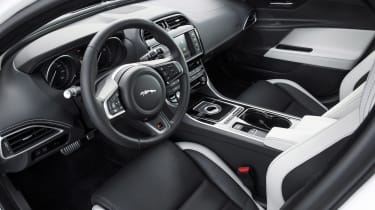 The slight issues here come from just one or two areas, such as a cheap-looking leather gear gaiter on the manual models, some ill-thought out ergonomics (the light on the centre console that shows which driving mode you’re in is invisible in bright sunshine) and rear-seat packaging that makes it 'cosy' in the back for six-footers.

It's more comfortable in the front though, with a good driving position and plenty of adjustment in both the seats and steering wheel. Jaguar's rotary gear selector is feeling a little old-hat these days but still operates logically, and the steering wheel feels good in the hands.

Optional technology on the XE, beyond the standard-fit satnav and InControl, includes some excellent toys, such as a laser head-up display (although the graphics are rendered in strange green and red hues), a Meridian sound system, Adaptive Cruise Control and Jaguar’s new All-Surface Progress Control, which promises to keep the rear-wheel drive XE moving even in snow and ice.