Jaguar reveals its new XF and XFR saloon and XK and XKR coupe and convertible. Is a 542bhp XFR-S coming? 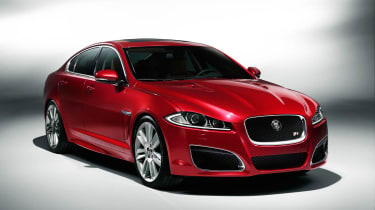 Jaguar has revealed the updated versions of its XK coupe and popular XF saloon. The XK receives a relatively minor nip and tuck, adding the reprofiled headlamps with integrated running lights first seen on the XKR-S, and slimline chrome flourishes on the nose, There’s further chrome embellishment on the side repeaters and LED rear lights.  Inside the freshen-up extends to new trim finishes and optional sculpted leather sports seats. Powerplants and drivetrains remain the same for both coupe and convertible, consisting of the familiar 5-litre 380bhp/380lb ft V8 in the XK, which is supercharged to 503bhp/461lb ft in the XKR.  Both are set to go on sale in the UK in September, with a small price rise likely on the range’s £63,900 kick off and rising to £97,000 for the XKR-S. The revised XK will be joined by the facelifted XF saloon, which has gained a substantial collection of aesthetic and mechanical modifications. Of most importance to a wealth of Europeans buyers will be the long-awaited introduction of a 4-cylinder diesel engine to rival the BMW 520d and Audi A6 2.0 TDI. The 2.2-litre unit produces 187bhp and 332lb ft of torque, comfortably more than the 174bhp/280lb ft Audi, and just trumping the 184bhp/280lb ft BMW. This impressive output accelerates the entry level XF to 62mph in 8.5sec and a top speed of 142mph. The unit also boasts stop/start, which along with the new ZF eight-speed automatic gearbox, contributes to claimed figures of 52.3mpg and 149g/km. The 3-litre V6 diesel in 238bhp and 271bhp format remains, as does the 5-litre petrol V8, with identical power and torque figures to the XK and XKR.  The XF itself has been refinished to emulate its bigger XJ brother, with aggressive headlights and a more upright front grille, which at last gives the XF the look of the C-XF concept from 2006. Front vents and rear taillights have also grown to enhance to car’s sporty pretensions. Tantalisingly, there’s also strong scope that Jaguar will drop the 542bhp/501lb ft supercharged V8 from the halo XKR-S into the XFR, creating an XFR-S to properly challenge BMW’s upcoming circa-560bhp turbocharged M5. Prices for the new XF range will start at £30,950 for the fleet market pleasing 2.2-litre, while if an XFR-S makes production, expect it to top the range at around £85,000.