Jaguar XF review - is the Jaguar's exec-saloon best in class?

Jaguar’s XF may be new in terms of interior and exterior looks, the materials used to make it and elements of the powertrains offered, but peel away its new aluminium intensive construction and the XF is no fresh faced saloon.

The XF borrows heavily from the smaller XE and as a result is definitely one of the more dynamically adept options within the executive car class. As such the Jaguar is the more entertaining steer in the class, even bettering the all new BMW 5-series which has historically been the most fun executive car to drive. The BMW is the more rounded machine however, offering a level of refinement and tech the XF just can't match.

With Mercedes’ E Class also having undergone a thorough update in recent years, it now also leads the XF on refinement, powertrains and cockpit technology, although the Jaguar is a more involving drive than the Mercedes. Audi’s A6 isn’t the most thrilling to drive but it’s incredibly competent and its interior is of the highest quality, even if it does lag behind in terms of technology.

The new XF may have its shortcomings, but in the right trim and spec it’s a compelling proposition and a strong alternative to its key rivals from Germany. 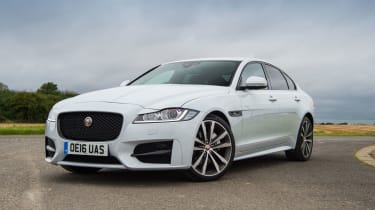 > Engine, gearbox and technical details - The XF's engine range is made up of four-cylinder petrols and diesels, and a V6 diesel. The supercharged V6 petrol has recently fallen by the wayside, so currently the sportiest option is a 296bhp four-cylinder Ingenium petrol.

> Performance and 0-60 time - No XF is truly fast but the 296bhp petrol and diesel at the top of the range should be quick enough for most, and also deliver their performance with the least fluster.

> MPG and running costs - WLTP changes have taken chunks from the claimed economy figures but those numbers should now be more realistic. Petrol four-pots and the V6 diesel are thirstier and correspondingly more expensive to run.

> Interior and tech - A key downfall in this class, the XF is nowhere near as advanced as the BMW 5-series, tech-laden as the Mercedes-Benz E-Class nor serene as Volvo's lovely S90. The design also leaves much to be desired, lacking any of the imagination or thought we know Jaguar can possess.

> Design - The XF looks handsome, yet also perhaps is a bit to similar to the smaller XE. Substantial changes have been made though, with the longer body and shorter overhang giving the new car a more dynamic appearance than the old one. 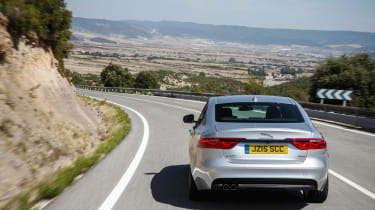 Petrol models meanwhile start from £38,100 in 247bhp Prestige trim (and are automatic only) while all-wheel drive adds £1450. Those after a sportier drive may be interested in the 296bhp R-Sport, from £45,015, but sadly the 3-litre supercharged XF S is no longer. You can get a V6 diesel however; a 296bhp Sport starts at a not inconsiderable £52,010 in automatic, saloon form.

Natural Jaguar XF rivals come from Audi (A6), BMW (5 series), and Mercedes-Benz (E Class). All three have been updated or replaced entirely in the last couple of years so all present a strong challenge for the Brit.

If there's one area the XF does still have an advantage it's in its balance of ride and handling. The 5-series and E-class get close, but neither can quite match the natural, fluid feeling of threading the XF down a twisty road. On more open stretches the BMW and Mercedes do feel slightly more restful, but the XF is hardly deficient in this area.

Where the XF's rivals do score is in their choice of powertrains. There's no getting over the XF's four-cylinder units not feeling quite expensive enough for a car in this class, and a drive in one of BMW or Mercedes' straight-six models or an Audi V6 to show you what you're missing. Refinement, for the most part, but also that more intangible sense that money has been spent on the engineering, where it matters.

Those German rivals show up the XF in other ways too. All three have better cabins, being both more imaginatively designed and packing better technology. Audi's dual touchscreen system may not be to all tastes but it works very well once you're used to it, while the E-class's mini-S-class feel makes you wish Jaguar had given its XF more of the larger XJ's character. 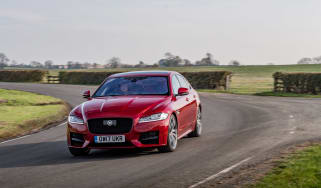 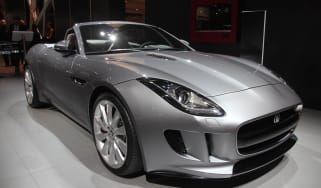 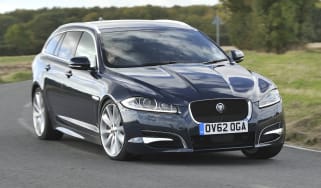 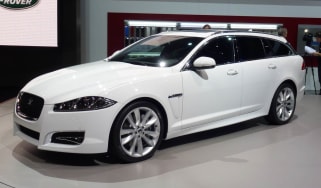 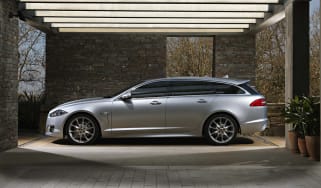 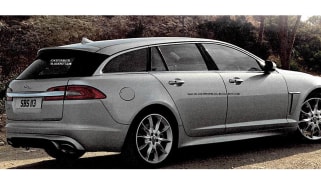 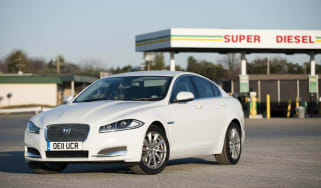 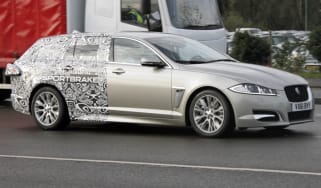 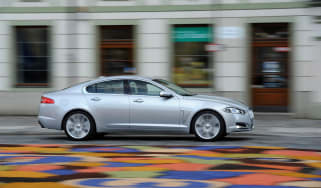 The Jaguar XF has finally got the four-cylinder 2.2-litre diesel engine that buyers have been waiting for.
New Jaguar XF estate production 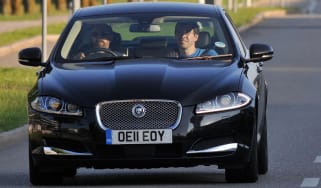 A five-door estate version of the Jaguar XF is due. But will we get a 503bhp XFR station wagon?
New Jaguar XF and Jaguar XK news and pictures 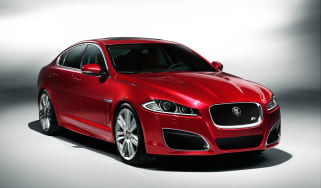 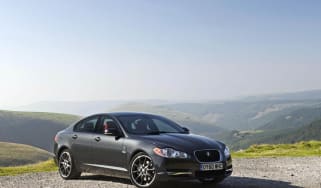 Want your Jaguar XF to have a bit more visual punch? This new Black Pack might be the answer.
Jaguar XFR 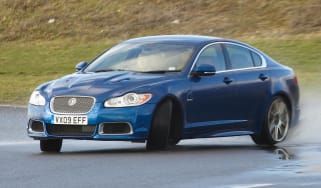 Time to say farewell to the Jaguar XFR. Ollie Marriage reflects on a year at the wheel of the most habitable super saloon around.
Jaguar XFR 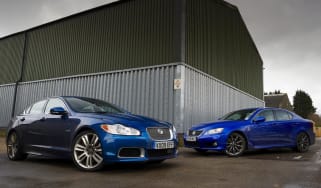 IS F versus XFR - far from a foregone conclusion. Time for the big Jag to get rid of its winter tyres.
Jaguar XF Diesel S review 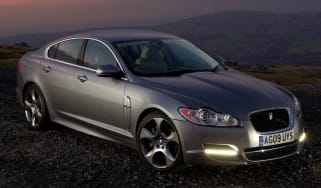 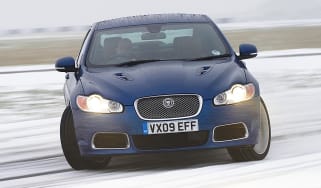 The winter tyres for the XFR have arrived - and boy do they make a difference. Once we'd got them fitted that was...
Jaguar XFR 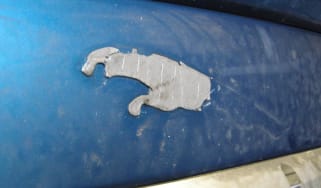 Vandals have attacked the XFR this month. But Ollie Marriage isn't despairing just yet.
Jaguar XFR 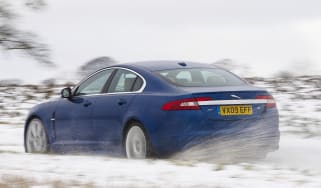 Can you use a 500bhp super saloon in the snow? Ollie Marriage has been having fun answering that one.
Jaguar XFR 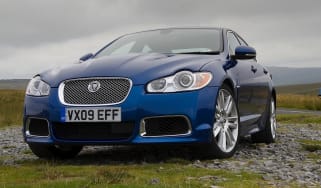 Ollie's been driving other supercharged cars this month. Do any match up to the mighty XFR?
Jaguar XF SV8 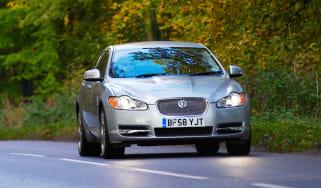 Time for us and our Jaguar XF SV8 to part company, and we already miss it...
Jaguar XF SV8 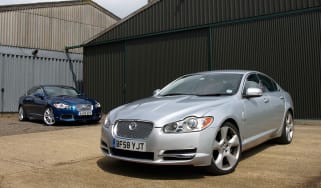 A 1,400-mile long-weekend trip to Budapest and back left the driver remarkably relaxed, testament to the Jag XF's build
Jaguar XF SV8 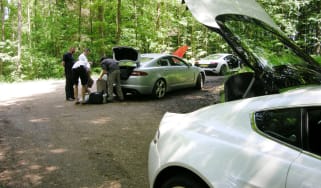 A comfy way to travel but the XF's satnav sometimes talks with a forked tongue...
Load More
Skip to HeaderSkip to Content