XF’s chassis still has the measure of rivals, but while improved, the four-cylinder lacks excitement 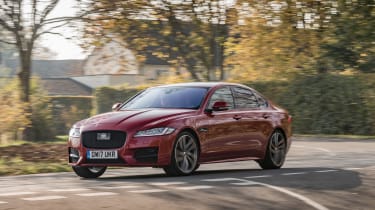 WLTP shake-ups mean several vehicle line-ups are in a state of flux at the moment. Jaguar is one such company, having entirely ditched petrol variants of the flagship XJ saloon, and dropped six-cylinder petrol engines from the XE and XF ranges.

That leaves the four-cylinder, 296bhp Ingenium petrol as the XF’s current range-topper. Tested here in R-Sport trim, does it still deliver a true Jaguar experience?

> Click here for our review of the Jaguar XE 300 Sport

The XF range has been consolidated into a pair of 2-litre four-cylinder units and a 3-litre turbocharged V6 diesel. Here we’re driving the most potent four-pot petrol, attached as standard (in 2018 model year trim) to an eight-speed ZF automatic transmission and all-wheel drive.

The 2-litre’s peak power output of 296bhp is delivered at 5500rpm, while 295lb ft of torque is also available from 1500rpm. On paper that results in a 5.8sec 0-62mph run and 155mph, and on the road it feels good for the former at least, putting its power down cleanly and pulling insistently through the gears. 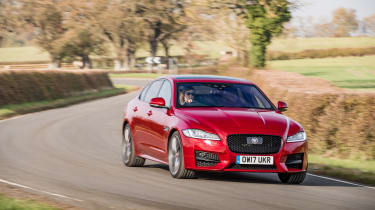 We’ve never been a fan of the Ingenium four-cylinder’s harsh feel and droning sound, but this is among its more refined applications yet. There’s even a tuneful warble in the background under acceleration, but otherwise noise and vibration are kept to a minimum, even under larger throttle openings. If you can’t make it sound engaging, then hiding it is the next best option.

Throttle response is good too, picking up quickly from low revs and offering usable thrust with larger prods of the accelerator. The auto also works swiftly whether using the paddles or letting it get on with things, and the mapping seems better than it has been in the past – the ’box will happily use the torque at low revs in higher gears rather than changing down multiple cogs.

When you switch to Sport mode (for the transmission or via the switch on the centre console) the ’box will drop a few ratios automatically, but overrule it with the paddles and it won’t immediately revert back and scream away again when you switch back to auto – hurrah for a common sense approach to sporty gearbox modes. 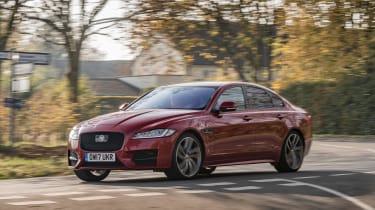 It’s a shame there’s not more character on display though. While the four-cylinder is undoubtedly improving and delivers on pure performance, it’s hardly the most inspiring petrol range-topper for a car in this class. The German brands and even Lexus offer six- and eight-cylinder petrol models above their volume fours.

Like the majority of Jaguar’s range the XF uses an aluminium monocoque structure, and has become something of a running gag. This doesn’t so much make the XF lightweight as it does less heavy than it might be were the company still using steel - at 1715kg, the XF R-Sport with the 296bhp four-cylinder and all-wheel drive is only 20kg lighter than a six-cylinder BMW 540i xDrive M Sport made from steel.

For all the XF’s lack of visual character or interior surprise-and-delight features, it’s thankfully still a satisfying car to drive, with a natural fluidity to its chassis that probably just about pips the BMW 5-series and Mercedes-Benz E-class and is several paces further ahead of an Audi A6.

The steering too plays a part in driver satisfaction. It responds keenly off-centre but it’s well weighted too, and that weight builds up naturally according to your demands on the chassis. There’s not much true feedback, but the steering feels natural enough that you shouldn’t mind much. 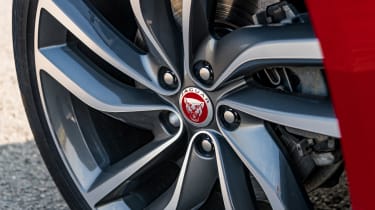 Ride, meanwhile, is very good, even on the 19-inch wheels fitted here. There’s a firm edge befitting the R-Sport trim, but you only realise how much the XF is filtering out when you then climb into something less cossetting than the Jag and find yourself headbutting the headliner over the same stretch.

Only when you push harder does the XF’s weight begin to show – on the same roads as an identically powered XE 300 Sport, the XF’s reactions were just a little slower and its body movements just a little greater.

The Jaguar XF R-Sport 300PS comes in at £44,335 on the road, which nets you such niceties as 18-inch alloy wheels, Xenon headlights, R-Sport styling elements, a 380W, 11-speaker sound system and eight-way adjustable leather seats. As tested, our car was wearing £1255-worth of 19-inch alloy wheels, a £1270 head-up display, upgraded infotainment with a 825W Meridian sound system and navigation coming in at £2670, and several other options besides – make no mistake, German brands aren’t the only ones who can squeeze additional high four-figure sums from you by the time you’ve left the showroom.

Closest rival on paper to the 300PS R-Sport is BMW’s four-cylinder 530i M Sport (£45,200, though you’ll need the 540i xDrive M Sport at £52,525 to eclipse the Jag’s performance). Audi and Mercedes-Benz don’t currently offer similar petrol-powered models at this price point, though with the S6 and E53, both do field higher-performance petrols in their respective line-ups, albeit in the high-£50k to low-£60k range.

Jaguar probably pips all three at this market level for driver appeal but currently lacks a true high-performance XF, while all three Germans offer better cabins and more up-to-date technology.