M3-lite version of Jaguar’s XE is deceptively rapid, predictably refined, and is therefore a welcome addition 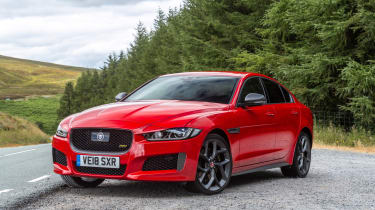 Jaguar has long needed a high-performance halo model to give the XE a push from the top, and to sprinkle some sex appeal across the rest of the range. The V6-powered XE S somewhat fulfilled the role, but its high price tag and coarse engine never really seemed to be able to compete with rivals like the Audi S4 and Mercedes-AMG C43.

So to go back on the offensive, and replace the XE S as the range topper, which was recently killed off by new emissions laws, Jaguar has launched this, the new 300 Sport. Although the new 296bhp flagship model isn’t a fully committed attempt to solve this issue, it’s now hoping to undercut its German rivals by entering the space below the S4, with both styling and dynamic upgrades to help it pull in the punters. Question is, does it go far enough?

> Click here for our review of the new Mercedes-AMG C43 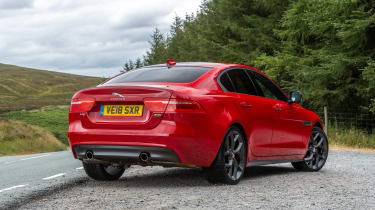 The 300 Sport is powered by the pokiest version yet of Jaguar’s ever-so-slightly underwhelming four-cylinder, turbocharged petrol ‘Ingenium’ engine. In this case it produces 296bhp at 5500rpm and 295lb ft between 1500-4500rpm.

According to Jaguar it has also been tickled in various ways internally to improve refinement, and to deliver smoother but more sporting responses via new mapping for the throttle, exhaust, and for the transmission – which is the ubiquitous eight-speed auto from ZF. 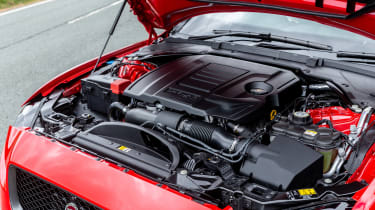 Jaguar thought long and hard, by all accounts, about whether to offer two different versions of the 300 Sport; one two-wheel drive, one four-wheel drive. In the end it decided that just one model – a four-wheel drive – would be sufficient. On cost grounds alone it’s hard to see why an additional 2WD version would have been desirable.

Even so, the 300 Sport’s all-weather versatility does provide it with an extra element of appeal over such as BMW’s rear-wheel drive 340i M Sport. As does the fact that Jaguar hasn’t gone for a full-blown sports saloon set-up with the steering and suspension.

You get adaptive dampers as standard, true, alongside the previously optional bigger brakes and various tweaks to the suspension. But, says Jaguar, the 300 Sport still remains fundamentally civilised dynamically. It isn’t meant to be a flat-out road burner, despite its new 19-inch wheels and tyres, or optional 20-inch items as fitted to the test car. 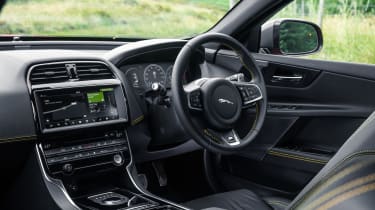 Sporting, yes. Deceptively rapid, too, but all delivered with an underlying sense of calm, of soothing, effortless refinement. So a bit like most other mainstream Jaguars, really, but with more emphasis on driver appeal.

The highlights are the steering, which has a lovely smooth accuracy to it and suffers from seemingly zero kickback, even over the roughest surfaces; and the way the adaptive suspension breathes so cleanly with the road is also a delightful thing to experience, as is the almost magical absence of tyre and road noise generally. Jaguar really has nailed the refinement of the 300 Sport, and it feels quietly majestic on the move as a result.

Maybe a touch too chilled for its own good given the brief to spread some bravura across the rest of the range, who knows? 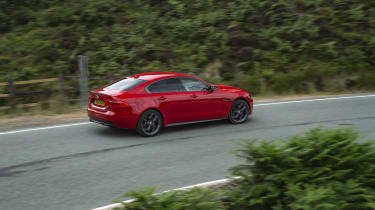 On the one hand, it’s hard if not impossible to objectively criticise what the car does in any particular area. It covers the ground with supreme ease, and has genuine pace, while providing enough entertainment en-route to engage most keen drivers, most of the time.

On the other hand, the 300 Sport could maybe do with a bit more drama from its near-silent engine and exhaust, plus a touch more edge to its personality in general, if only to distinguish it more clearly from the rest of the XE range.

Instead, it is far closer in concept and delivery to another car from BMW, the 340i M Sport. This starts at £41,630 yet has more power and torque than the Jaguar, a touch more performance and a lot more aural appeal thanks to its six-cylinder turbocharged engine.

Then again, the 300 Sport is a lovely thing to drive in many respects, with a fine chassis, great steering and deceptively strong cross-country pace, but if nothing else, it’ll make a good twin test.