Not a truly complete £50K sports saloon, but a fine car and new chassis seriously impresses 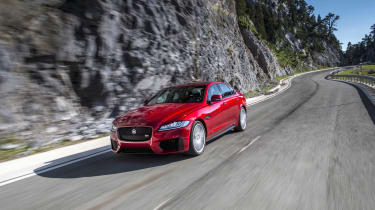 The all-new XF saloon, Jaguar’s replacement for the car that began their modern renaissance back in 2007. At present, this 3-litre petrol is the fruitiest XF you can buy before the inevitable R variants arrive.

Want that six-pot motor under the bonnet and you have to go for the tougher-looking S model in the UK. There’s a choice of either the 3-litre TDV6 or, as tested here, the 3-litre V6 petrol equipped with a twin vortex supercharger. The XF gets the 375bhp version of this engine, unlike the 335bhp version in the XE, but it’s hooked up to the same eight-speed ZF automatic gearbox; paddles behind the ‘wheel allow for manual control. The 0-62mph sprint is quoted as 5.3 seconds, while the top speed is electronically limited to 155mph.

The new XF’s uses Jaguar’s ‘aluminium intensive’ platform shared with the XE. Largely of alloy construction, it includes alternative metals where different properties are required, such as Boron steel for additional strength in the B-pillar. Jag claims the new car is up to 190kg lighter than the one it replaces, and also 28% stiffer in torsion. It’s slightly shorter and lower than the old XF, but a longer wheelbase means there’s more room in the cabin.

Under the skin the XF is a real sophisticate: at the front it uses a double wishbone suspension made largely from aluminium; at the rear a new ‘integral link’ axle debuted on the XE. This suspension includes a fifth vertical link that separates the longitudinal and lateral forces: in practise that means some of the bushes can be softer for an improved ride, while the remainder are firm for better camber control during enthusiastic cornering. Jaguar’s Adaptive Dynamics variable dampers are standard on the S, and the XF also benefits from the latest generation of electrically assisted power steering. 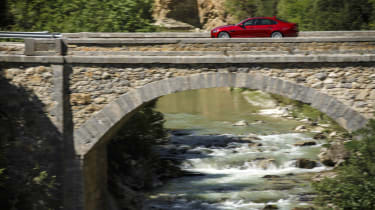 Some elements of the new XF S are merely decent, while others are absolutely outstanding. Let’s start with the former. The supercharged ‘six’ has so far failed to wow us in the XE, and is even less vibrant here. It has a broad spread of torque, true, and allows you to crack on at a rapid rate across the ground, but when you consider this is a near-400bhp car it somehow manages to keep the heart rate far lower than might be expected. It also has an anodyne note that becomes wearing when driven hard. The ZF ‘box is mainly very good, as we’ve come to expect, but it does sometimes dither over gear choice.

Thankfully, the overall ride and handling balance of the XF S is fabulous. It’s hard to think of another car on sale presently, especially when the Jag is on the standard 19” wheel option, that combines such a fluent ride with the kind of dynamics that make you want to grab this large saloon by the scruff and hurl it repeatedly into bends. It steers with an integrity well beyond a 5 Series, and the brakes are surprisingly game too when given a workout.

Inside, the XF S cocoons you in a warm, cosy cabin completely at odds with the Germanic competition. It’s a nice place to be, but some of the minor details and unfortunately placed cheap plastics mar the overall experience, as does a slightly high-set driver's seat. 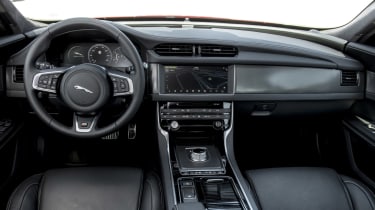 The Jag falls between the £44,940 302bhp BMW 535i M Sport and the £58,110 443bhp 550i M Sport in terms of price and fuel consumption, although its 0-62mph time is nearer the former. You could argue that the British car would rank higher in a beauty pageant, but the BMW's higher quality cabin might drag the scores back to equal.

At £49,945 the 3.0 S is the most expensive XF currently on sale. You can delete the chrome with a £650 ‘Black Pack’ and the new InControl Touch Pro infotainment system is available from later this year, starting at £1,200.