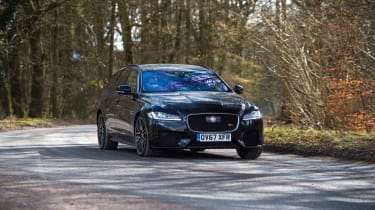 Jaguar wasn’t planning to produce a Sportbrake version of its latest XF, with the F-Pace already going great guns in the market and providing practically-minded Jaguar buyers with a suitable option.

But we’re glad it has, because like its predecessor the latest Sportbrake is a handsome and elegant shape, more so than any SUV could ever be, and allows Jaguar to compete in a segment where buyers still opt for wagons in large numbers, as much for their styling as their utility. The car you see here is the best wagon Jaguar offers – the 3-litre V6 S, with the subtle bodykit and sports suspension that entails. Enough to set aside that desire for a BMW 5-series Touring? We shall see.

We’re testing the top-end diesel model here, which means JLR’s 3-litre turbocharged V6 diesel powerplant making a round 300PS (or 296bhp in old money) at 4000rpm, with a healthy-sounding 516lb ft of torque delivered at 2000rpm. 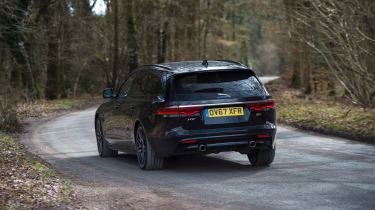 Driven through a standard eight-speed automatic transmission (to the rear wheels alone, which almost seems like a novelty in a car of this type) it’s good for a 0-60mph run of 6.1sec and a top speed limited to 155mph – figures competitive with the BMW 530d Touring and Mercedes-Benz E350d Estate, though both the Germans do the same (or more) with lower power and torque outputs, and the Mercedes approximating the Jag’s figures despite weighing around 150kg more.

It’s a similar story with economy, the Jaguar’s official 49.6mpg being similar to the chunky Mercedes but lagging the 530d Touring’s 56.5mpg.

The current-generation XF uses primarily aluminium in its construction, though as we’ve discovered with other JLR products that’s no guarantee of the cars being lighter than their competition – at 1855kg the XF S Sportbrake is a heavy old thing and only on par with, rather than lighter than, its (steel-bodied) competitors.

Suspension is by double wishbones up front and what Jaguar calls an 'integral link' set-up at the rear derived from that of the F-type – an alternative to the widely-used multi-link approach that allows Jaguar to separate tuning of lateral and longitudinal stiffness, in theory providing more compliance (Jaguar says its bushings are softer than those of competitors) with no penalty in precision. S models like those tested get a 'sports' set-up and the Sportbrake’s stern is self-levelling and suspended by air.

The XF continues to be one of the more engaging steers in this segment. From the moment you get going you’ll be pleased by the snappy throttle response, well-weighted steering, pliant ride quality and responsive dynamics, and most of those initial qualities hold up as you start to build up the pace.

For a V6 the diesel is surprisingly clattery at idle and low revs, and has an uneasy relationship to the eight-speed automatic gearbox. Low down (or when aiming for the red line), the engine is surprisingly vocal, with revs flaring and a diesel clatter grumbling through the bulkhead when trying to pull away swiftly from junctions and roundabouts, as if the gearbox is having a think while the torque converter merrily spins away to itself. 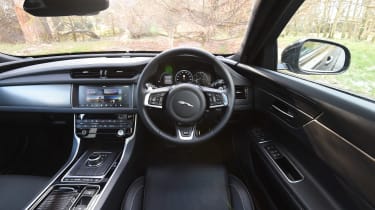 Gearchanges aren’t the smoothest, either, though they’re acceptably snappy when using the wheel-mounted paddles, something that’s vital to keep the engine in its sweet spot. When you do, the V6 begins to show its better qualities – competitive refinement, eager responses to each squeeze of the right-hand pedal, and meaty, effortless mid-range performance – albeit without the subdued yet sonorous tone of rival six-cylinder diesels.

Some wind noise creeps through when the engine noise dies down, but comfort levels are still high thanks to supportive seats (more so longitudinally than laterally) and a ride that successfully treads the fine line between compliance and body control. It doesn’t completely eliminate poor surfaces, but there aren’t many roads that would completely flummox the chassis, even when knocking the Adaptive Dynamics switch into its sport mode.

The steering is light on feedback but does everything else rather well, feeling responsive and well-weighted just off the straight ahead and precise as you add more lock – and the front end responds gamely, too, with good grip. 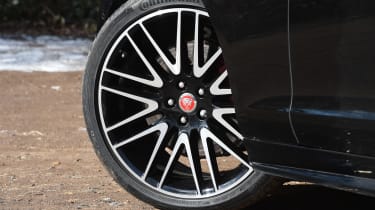 With so much torque on tap you get a satisfying sensation of the rear axle helping out as you feed in the power, too, tightening your line without ever feeling edgy. It’s not the kind of chassis that would get you out of bed for a dawn raid on local roads, but as a tool for commuting and family duties it’s more entertaining than it strictly needs to be.

The German trio of Audi A6 Avant, BMW 5-series Touring and Mercedes-Benz E-class Estate provides Jaguar’s strongest competition. The former is in the process of being replaced (though the outgoing Avant was still a desirable executive express), while the BMW and Mercedes each have their own merits.

The BMW is the all-rounder of the group, with high levels of practicality and comfort and an unflappable (if not hugely engaging) chassis. The E-class perhaps feels the most special, with an S-class-inspired cabin and up-to-the-minute technology that Jaguar can’t hope to match on either count (JLR's infotainment continues to lag behind and the XF's cabin is pretty nondescript), to which the Jag counters with a more entertaining chassis.