2018 Audi A6 makes a new bid for executive car dominance

This is the new 2018 Audi A6, the car Audi hopes will give it an edge over the BMW 5-series and Mercedes E-class 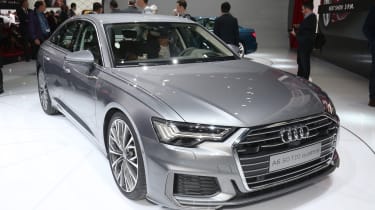 Audi’s product offensive continues with this, the new A6 saloon making its world debut at the 2018 Geneva motor show next week, before going on sale in June.

Taller, longer and wider than the car it replaces (by 2mm, 7mm and 12mm respectively) the new A6 follows the recently launched new Audi A7 and last year’s A8 with a design that is very much evolutionary rather than revolutionary. Audi’s designers tell us the new car’s character is one of ‘sporty elegance, high tech and sophistication’ achieved through ‘taut surfaces, sharp edges and striking lines’. To us, it looks like an updated A6, which given that the outgoing car didn’t offend, that’s fine by us. Exec saloons aren’t meant to be objects of desire, after all.

Inside, there’s more room, more digital technology and driver assistance systems than before. Little of it will enhance the driving experience or be as up-to-date as your smartphone. So we’ll move on. 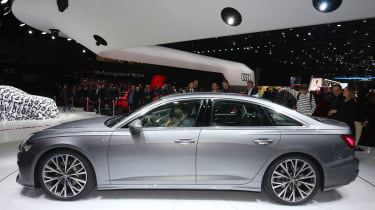 Behind the single-piece front grille will be one of four engines: three diesels and one solitary petrol engine. The former includes two 3-litre V6 turbodiesels developing 285bhp and 457lb ft and 231bhp and 368lb ft respectively, and a 204bhp/295lb ft, 2-litre, four-cylinder turbodiesel. The sole petrol engine is a 3-litre V6 turbo, producing 340bhp and 368lb ft of torque. All A6 engines will have a mild-hybrid system, with the V6 motors featuring a 48-volt electrical system, the four-pot a 12-volt system. Both systems feature a belt alternator starter working in conjunction with a lithium-ion battery, allowing all four models to coast between 34mph and 99mph on electrical power.

The pair of V6 diesels are mated to an eight-speed automatic, the V6 petrol and four-cylinder diesel to a seven-speed S tronic gearbox. All 3-litre-engined A6s will have quattro four-wheel drive, with the 2-litre diesel front-wheel drive. Tiptronic-equipped models with quattro will also feature a centre-locking differential, with a rear-locking diff available as an option.

With its new A6, Audi has also taken the decision to equip all models with four-wheel-steering to improve agility and responses from the new variable-rate steering rack. At low speeds the rear wheels will counter-steer in the direction of the front axles by up to five degrees.

Underpinning the new A6 will be four chassis options: conventional steel springs, a sport suspension set-up, steel springs with adaptive damper control, and air-suspension with adaptive damping. The entire suspension has been redesigned over the outgoing A6, too, with many of the components now manufactured from aluminium, as are the front brake callipers to help with the increase in unsprung mass due to the increased wheel sizes that will be offered, including 21-inch rims with a 255/35 profile tyre. 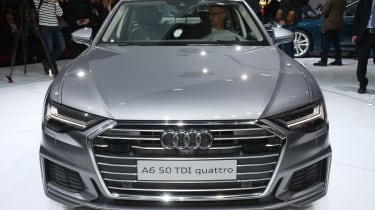 Audi has yet to confirm prices for the new A6, S and RS models – the latter expected to be offered with two engines, including a turbocharged V8 with plug-in hybrid technology similar to Porsche’s Panamera Turbo S E-hybrid. We expect the new A6 Avant and allroad models to be announced before the end of the year with the S6 due in 2019.