RWS has rarity on its side, but for the most part it doesn’t feel different enough from the already excellent standard car 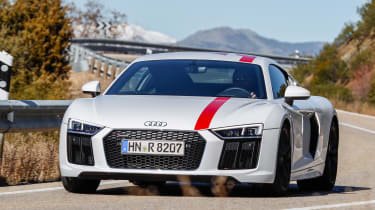 Think of a go faster Audi and no doubt it’s a quattro model that springs to mind. In fact, until its recent rebranding as Audi Sport the brand’s high-performance skunkworks was called Quattro GmbH. Fast Audis are four-wheel drive: that’s a fact. Well, not quite, because there’s now the R8 RWS. Those three letters stand for Rear Wheel Series, which means that, yes, this mid-engined sports car is rear-wheel drive. This marks a radical departure for Audi – you’ll have to delve into the company’s very earliest days in the 1920s and ’30s to find a car that wasn’t front or four-wheel drive.

So why now? Well, according to Audi Sport CEO Stephan Winklemann ‘The R8 RWS is for purists. A limited-edition model for customers with an appreciation for essential driving enjoyment’. So, people like you and me, then. Not many of us, mind, because production is limited to just 999 examples, spread between coupe and Spyder convertibles, with prices starting at £110,000.

So what do you get for your money? You get less weight for starters, with the omission of the four-wheel-drive gubbins resulting in a claimed 50kg saving over the standard model. You also get some natty Audi Sport badges in the places vacated by the old quattro logos, plus the dashboard is garnished with a small ‘1 of 999’ plaque. And, well, that’s sort of it. You’d need to be an arch-Audi spotter to note the differences externally, which run to some gloss black trim inserts. Those with a more exhibitionist streak can specify some red stripes that run over the bonnet, roof and tip of the tail, but other than that the RWS is standard R8. This even runs to the engine and transmission, which is the same combination of 533bhp, 5.2-litre V10 and seven-speed twin-clutch found in the entry-level four-wheel-drive machine. 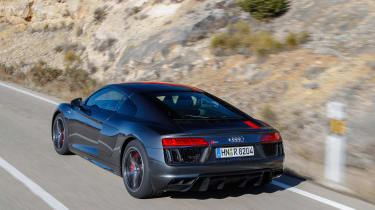 The big news on the R8 is the deletion of the four-wheel-drive system. Essentially this means the removal of the multiplate clutch centre differential, the propshaft and front driveshafts, which results in a 50kg (40kg on the Spyder) saving in weight over the quattro version. To compensate for this reduction engineers have recalibrated the dampers, added a ten per cent stiffer front anti-roll bar, remapped the stability control and tweaked the electric power steering. It’s hardly the hardcore mechanical makeover you’d expect of a car aimed at ‘purists’.

Elsewhere, the car is identical to the standard model. That means it’s essentially hand-built at the brand’s Böllinger Höfe facility using plenty of aluminium and carbonfibre reinforced plastics in its strong and relatively light Audi Space Frame (ASF) construction. Like the quattro, the RWS gets an aerodynamically sculpted underfloor, while the suspension is by double wishbones all-round. Our car was also fitted with the ‘laser’ LED headlamps, which promise a main beam range of 600 metres, which is twice that of the normal set-up – although in practice it’s light projection was no better than that of Porsche’s standard LED units for the 911. 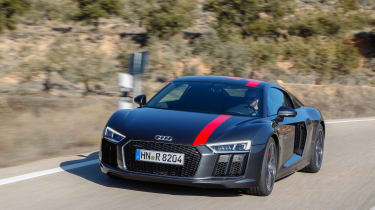 Mounted in the middle of the R8 RWS is the familiar naturally aspirated 5.2-litre V10. However, despite its brief as a ‘drivers’ car’, the RWS gets the lower-powered version, meaning a still healthy 533bhp at 7800rpm, and a heady 398lb ft of torque at 6500rpm. Mated to the engine is Audi’s seven-speed S tronic twin-clutch transmission that drives only the rear wheels through a limited-slip differential.

While the RWS benefits from a decent weight saving over the quattro, reduced traction means it’s actually two-tenths slower from 0-62mph with a time of 3.7 seconds. Still, with a 198mph top speed it’s actually 1mph faster than its four-wheel drive sibling, so you win some, you lose some…

> Click here to read our review of the standard Audi R8

Ignore the numbers, though, because whichever way you cut it the RWS is still spectacularly fast. The mid-engined layout means traction is strong, allowing the RWS to deploy its considerable performance potential at will. Yet it’s the way the engine serves up this pace that’s truly captivating, the V10 delivering the full operatic performance from growling idle all the way through to its spine-tingling, yowling crescendo at 8500rpm. This is one of the great internal combustion engines. It’s further enhanced by the transmission, which delivers seamless and rapid-fire shifts on the way up the ’box, plus a delicious blip of the throttle with every downshift. It’s also smooth and intuitive when left to its own devices. If only the small, plasticky paddles could be replaced with something more befitting a blue-blooded supercar. 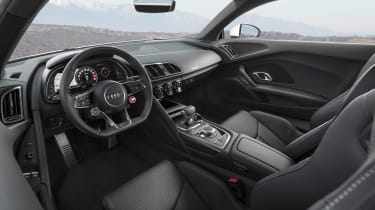 This is where the head-scratching begins, because despite messages being delivered by Audi Sport top brass, the RWS doesn’t feel all that different to the standard car. Now that’s no bad thing, because the balanced and agile R8 is the most driver-focused machine the brand builds, but we expected more from a car aimed so squarely at enthusiasts and that makes such a big play of its rear-wheel-drive underpinnings. In fact, only with the combination of disabled stability control and aggressive throttle application will you learn the RWS is two-wheel drive – and then the transition from grip to slip comes so quickly, aided by the pendulum effect of that giant engine, that you’ll need to be wide awake to gather it all up, particularly on the road.

For the rest of the time it’s business as usual. Push hard into a corner and there’s the faintest whiff of stabilising understeer, but the rest of the time the R8 is taut, composed and grippy, while over typically undulating and poorly surfaced British roads its excellent body control breeds confidence. And while the steering is typically Audi in its limited feedback, it is quick and precise, allowing you to place the RWS with confidence. The only real bugbear is the braking system, which lacks the precision and progression of the best set-ups.

Really get into a groove with the RWS and there are moments when you can exploit the rear-wheel-drive chassis to drive you out of a corner, the tail gently rotating round to straighten your exit. But these situations are both rare and, because you have to push the car very hard to get to this stage, it’s accompanied by a nervy sense that the R8 is a big car to gather up. Yet perhaps the biggest conundrum is that the quattro model wasn’t exactly a killjoy in its approach, its trick four-wheel-drive transmission giving you enough leeway to edge the tail out while always having the option to shuffle torque forward to stabilise any waywardness. More importantly, the greater traction means you can deploy all its performance when conditions turn nasty – in the RWS you go from confidence-inspiring to nerve-wracking in the blink of an eye. 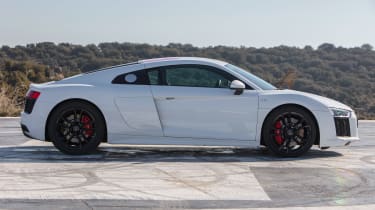 At £112,450, the RWS is now the entry point to R8 ownership, albeit for as long as it takes to shift 999 examples. Yet, while a £13,680 saving over the quattro makes the RWS look like good value in isolation, it’s less impressive in the context of the £113,857 Porsche 911 GT3. Here is a car that’s been tailored for the enthusiast and delivers on every single level. Where the Audi is a little mute in its communication with the person behind the wheel, the Porsche offers full sensory overload. Its glorious, barking 4-litre flat-six also comes close to matching the aural thrills of the Audi’s scintillating V10. Ultimately, the 911’s brilliance lies in its ability to make every journey an event to be savoured. The RWS, on the other hand, just feels like the already excellent R8, but without that car’s all-weather security.