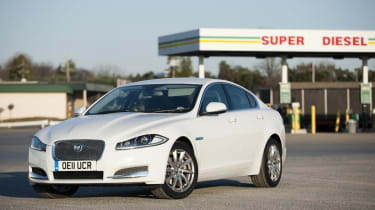 The Jaguar XF saloon range has dipped below £30,000 thanks to the introduction of a new entry-level diesel model. While the new 2.2D 163PS is 26bhp lighter than the existing four-cylinder diesel XF – sales of which continue – this new detuned version kicks off at £29,950, £1000 cheaper than its slightly pokier sibling and comfortably less than half the cost of the £65K XFR sports saloon. Though with 503bhp, that’s over three times as powerful… The 161bhp XF will be noticeably slower than the 188bhp 2.2D, 0-62mph taking over a second longer at 9.8sec and its top speed 12mph slower at 130mph. But while identical EU test economy figures are claimed for both cars – 52.3mpg and a VED band F-attracting 149g/km of CO2 – the cheaper car is likely to be less costly to run in real-world driving. Standard equipment for your sub-£30K includes part-leather seats, climate control, an eight-speed automatic gearbox and stop/start technology.