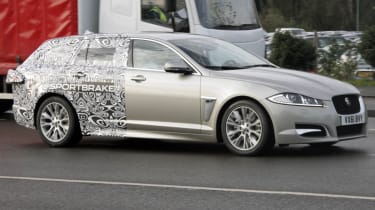 Jaguar has confirmed the existence of an XF estate with the release of this pair of official spy shot-style images. It’s also confirmed the car’s quirky name, the XF Sportbrake, a tag that joins Sportwagon, Avant and Touring (and good old Estate thanks to Mercedes) in the executive car class. No other information is yet available, but it’s a pretty safe bet that a choice of the XF’s current range of engines – 190bhp 2.2-litre plus 237bhp and 271bhp 3.0-litre diesels, and a 380bhp 5.0-litre V8 petrol – will drive the Sportbrake’s rear wheels. Though reports also suggest Jaguar will offer four-wheel drive on its XF and XJ models in the coming years, and a more practical estate variant would seem ripe to debut this. The 2.2-litre diesel will no doubt be the range best-seller, while it remains to be seen whether Jag decides to rival the Mercedes E63 AMG Estate with an XFR Sportbrake. With BMW refusing to commit to an M5 Touring, there’s certainly a gap in the market… We expect a reveal at the 2012 Geneva motor show in March, with sales beginning by the summer. Prices should be a small wedge higher than an equivalent XF four-door, which currently begins at £30,950.