Jaguar XF review - is the Jaguar's exec-saloon best in class? - Ride and Handling

You expect certain characteristics from a Jaguar when it comes to ride and handling; chiefly a controlled ride, a taught body and a sense of being part of the process. The new XF doesn’t disappoint.

There are double-wishbones at the front, a multi-link set up at the rear with passive dampers fitted as standard across the range. Six-cylinder engined cars can also be specified with optional configurable active dampers, first seen on the F-type.

Another component taken from the F-type is the latest EPAS steering, which has been further tuned to the XF’s dynamic make up and as with the F-Pace is a system that Jaguar now claims provides better feedback and precision than the equivalent hydraulic system.

With wheel sizes ranging from 17 through to 20-inch in diameter the XF’s ride always remains on the calm and sophisticated side. The high profile tyres fitted to the smallest rims produce an unexpected level of ride comfort in today’s world of sharp edged characteristics and that doesn’t deteriorate significantly as the wheel diameter increases and the tyre profile decreases.

There’s real fluidity to how the entire XF range dissects a road. On the standard passive dampers the body control never feels out of its depth, the chassis loading up with consistency, riding with a compliancy and changing direction with an agility of the very best in class. On the optional active dampers it’s a similar story, with improvements in terms of comfort in normal mode, although there’s no real discernable difference in Dynamic mode unless you really begin to push at the XF’s limits where it remains controlled until you breach the tyre’s grip and mild understeer takes over. 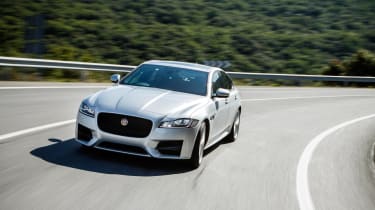 Torque vectoring is standard on all XF models, and while it doesn’t offer that on the limit adjustability of a locking differential it’s not intrusive when it cuts in.

The latest EPAS leads the class, with more natural weight than both Audi’s A6 and BMW’s 5 series, and superior feel over Mercedes’ new E class, the XF’s steering feels the most natural of all the electronic systems on the market, providing a level of feel, rate of speed and feedback unexpected from an exec saloon.

The all-wheel drive XF uses the same arrangement as the four-wheel drive F Type and F Pace; its predominantly rear wheel drive and torque is sent to the front axle if the rear looses grip. It works well in the F Type and F Pace, it isn’t inconspicuous system, whenever rear-end traction is broken as you can really sense the torque being sent to the front. However, being able to feel this only makes the cars more interesting and more involving to drive.

Unfortunately the AWD XF that we tested was the 178bhp diesel model and it didn’t have the performance to worry the tyres, let alone have the four-wheel drive system seeking out any available grip. Not even wet weather was enough to unsettle the diesel XF. The four-cylinder diesels simply don’t have the power to warrant four-wheel drive, in fact they’d benefit from the lower weight of just the rear wheel drive layout.