The estate version of Jaguar's XF has finally been revealed. Full details and gallery here 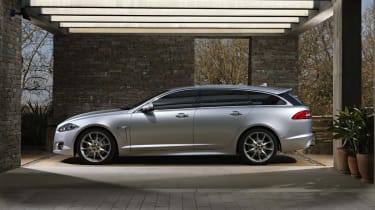 Following the leaked images of the new XF Sportbrake, and months of teasing us with the camouflaged development mules, Jaguar has finally revealed official pictures and full details of its eagerly awaited estate XF model, ahead of its launch at the Geneva motor show.

The Sportbrake takes the successful XF, and adds a new level of practicality. The five-seat tourer has increased headroom for back-seat passengers, and with the split-fold rear seats down, it can carry a copious 1675 litres of cargo.

Self-levelling suspension at the rear means heavy loads can be carried without compromising dynamics or safety. Initially powering the Sportbrake will be a choice of two diesel engines - the 187bhp 2.2 four-cylinder engine and the 237/271bhp 3.0-litre V6. There's no mention of V8 petrol or XFR Sportbrake yet, but expect more details come with the official announcement at Geneva.

All Sportbrakes will also be available with Jaguar’s Adaptive Dynamics System, which adjusting the damping rates according to road conditions, and can be firmed up with the press of a button. Jaguar is also keen to point out that the Sportbrake matches the saloon in both torsional rigidity, and aerodynamic efficiency, so it shouldn't lose any of its driving finesse.

Prices and specifications will be announced nearer the time of the launch, expected to take place towards the end of 2012.