Can you use a 500bhp super saloon in the snow? Ollie Marriage has been having fun answering that one. 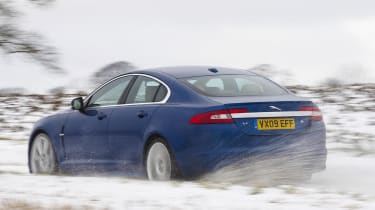 I have a heated steering wheel in the XFR. I think it’s brilliant. Round these parts a liking for this sort of thing is akin to confessing to a penchant for Coldplay, but you know what? I thought X&Y was a good album. There, I’ve said it. So go ahead, mock all you want, jeer and point – you’ll be doing it all with frozen fingers while mine are tightly wrapped around a heated rim. So to speak.

Before we get on to the obvious issues caused by putting 503bhp through the rear wheels of a two-ton supersaloon in ‘low traction’ conditions, I’d like to point out that as a winter car the XFR has a lot going for it. On a snowy morning I simply get in, press buttons to activate the heated seats, wheel and front and rear screens, spend the next two minutes with my chin tucked into my jumper and my fingers in my armpits, et voilà: a clear windscreen, a toasty steering wheel and I’m good to go with none of that tedious manual scraping malarkey.

OK, so during one particularly bad day of December’s ‘freak’ weather conditions the washer jets failed to squirt for the two hours it took me to drive to the office despite the lines being full of neat fluid. But that gripe aside the rapidity with which the Jag heats up in the morning suggests months of arctic testing. I like to imagine a huddle of engineers nodding sagely to each other in a Norwegian blizzard while discussing the parameters of the heated steering wheel – how long it should take to heat up, what temperature it should operate at, should it turn itself off after so many minutes – and then going out and giving it death on a frozen lake before returning to discuss slip angles, tyre choices, throttle response…

But who needs Norway when Northampton will do? Initially Chris Rutter and I were the only ones to make it in that day, and seeing as he’s our staff photographer it seemed a shame to waste a golden opportunity for some snowy high jinks on the local lanes. Winter mode, which dulls the throttle response and gives the stability system a bit more leeway, had done its job admirably on the way in, but right now I wanted the XFR to be a bit sharper and free from all electronic shackles.

The Jag was, I have to admit, wonderfully entertaining at 20mph, a complete hoot at 30 and dangerously lairy at 40 – especially when the speedo (connected to the rear wheels, obviously) was nudging 170mph. The XFR danced between hedgerows, slithered elegantly and drove like a car half its weight. Our snowy session also proved just how delicately controllable it is – drift angles can be managed to the nearest inch, you always seem to have more reaction and response time than you need and the Dunlop Sport Maxx tyres provided a near-perfect grip/slip balance.

Two days later I got it stuck in a single centimetre of snow. Somewhat surreally I got out of the car and watched the rear wheels spinning while no one was in it – a reminder that I’d left the auto gearbox in Drive. After five minutes of foraging for suitable branches to jam under the back wheels and scraping at the compacted snow and ice with my bare hands I was very glad of that heated steering wheel. I now have a set of winter tyres on order.