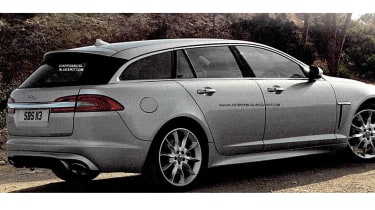 Images of Jaguar’s new XF estate have leaked ahead of its full reveal next week. The XF Sportbrake will have its wraps pulled off at the Geneva motor show, but these blurry scans – most likely from a press pack or the car’s brochure – have appeared on the internet. Naturally, there’s no manufacturer release yet so no official information yet surrounds the car. But it’s almost certain to use the same engine range as the saloon car – 161bhp and 188bhp 2.2-litre plus 237bhp and 271bhp 3.0-litre diesels, and a 380bhp 5.0-litre V8 petrol – to drive its rear wheels. Reports also suggest Jaguar will offer four-wheel drive on its XF and XJ models in the coming years, and a more practical estate variant would seem a ripe use of this.  The Sportbrake’s fairly svelte rear styling (and the lack of practical connotations in its name) suggests boot space won’t be class leading, but the model should be noticeably more useful than the XF four-door, and will make the car appeal more heavily to other markets, such as Sweden, where around 70 per cent of models sold are estates. Sales should begin later in the year, with prices starting at around £32,000. Standard equipment should match the saloon, with each model gaining part-leather seats, climate control, an eight-speed automatic gearbox and (engine dependant) stop/start technology. Full details will be revealed on March 6, when the Jaguar XF Sportbrake gets its full unveil at Geneva, and evo.co.uk will have live reports from the show floor.All of the 2012 Geneva motor show news is here