A 1,400-mile long-weekend trip to Budapest and back left the driver remarkably relaxed, testament to the Jag XF's build 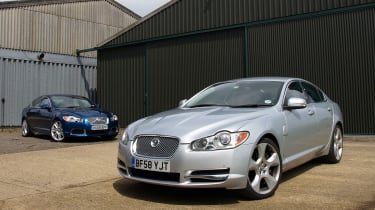 Jaguar didn’t compete at either the Nürburgring or Le Mans 24-hour races this year. Which is ironic really, because I think the company produces the best long-distance cars on sale today. It’s 700 miles from Nürburg to Budapest. It’s 700 miles back again as well. Out on the Friday (after watching John Barker in Thursday-night qualifying), back on the Sunday (in time for last month’s cover story). That’s a long way, but it’s testament to the serene and beautifully interiored XF SV8 that at the end of both stints I felt remarkably chipper.

I didn’t just pop over to Hungary for some goulash and a look at the Danube. I was there for a spot of running and cycling. Yet despite the fact that I had to jump straight into the XF after racing for two hours on the Sunday morning, in all the 12 hours back to Germany the driver’s seat never once invoked that awkward shifting-from-one-numb-butt-cheek-to-the-other routine.

The Bowers & Wilkins stereo was the other boon, being a real pleasure to listen to. It has a clear yet rich sound that seems to permeate the air around your head rather than assault your ears. A lot of optional so-called premium stereos that press cars inevitably come equipped with really don’t seem to merit the extra money and still distort badly as you crank up the volume, but the B&W system is undoubtedly worth the extra £1115.

For most of the journey I was juggling clues and solving cases with a certain Hercule Poirot because, short of travelling everywhere at speeds in excess of 160mph, I’ve discovered that talking books are the solution par excellence to passing time when driving a long way. The only blip on the SV8’s copybook was a satnav system that has three different discs for Europe but none with Hungary on. Most peculiar, but a chance for a new Agatha Christie story perhaps? ‘The case with the missing DVD’.

A couple of weeks later another long trip loomed, although only a paltry 800 miles all told this time. Unfortunately our SV8 had just reached the end of its sixth-month internship on our fleet (full end-of-term report next month) and Jaguar had taken it away. Fortunately they left an XFR for us to try for the next six months, so, all in the name of comparison, Father Catchpole and I bundled our camping equipment, shorts, wet-weather gear, etc. into the boot and headed off for the Eurotunnel early on a Friday morning. Simples.

The carriages on Le Shuttle really do require some precision driving with a car as big as the Jag, but the XFR’s rims (ironically not as nice as the SV8’s) emerged unscathed. Then it was just a matter of sitting back, setting the cruise to 130kph, putting ‘I’m Sorry I Haven’t A Clue’ on the radio and waving at the gendarmes on the way to Le Mans.To be honest, R seemed very similar to SV8 to begin with. On the péages it was just as blissful, which is obviously a good thing, although fuel sippage increased by a couple of notches, the R returning 22.4mpg. It got lots of looks at Le Mans too (especially from track security when we snuck on after the race to take some photos) but I suspect the SV8 would have turned nearly as many heads because the differences are subtle to say the least.

But, on the journey back to our campsite 20km west of the circuit, away from autoroutes and Roman-designed N-roads, the R came into its own. There’s not an instant tensing of the chassis when you find a decent stretch of road and up the pace, in fact the car remains remarkably smooth and serene. But it rolls less, reveals really good turn-in from the front end and has an underlying balance and composure that makes it an absolute hoot. The engine seems to wake up too, the supercharger giving instant big-hit acceleration. Driving large, rear-wheel-drive cars fast is often a hoot and the XFR is more hootish than most. Turn in early, get on the throttle, make use of the limited slip-diff, and with DSC off the long wheelbase will slide wonderfully easily through quiet French corners.

Jaguar has long been trying to appeal to my generation rather than my father’s and after my month of endurance I think they’ve hit the spot with the XF. Most will love it after merely sitting in it for five minutes and marvelling at all the ‘surprise and delight’ touches of the interior. The rest will be smitten if Jaguar just gives them really long test drives.