The winter tyres for the XFR have arrived - and boy do they make a difference. Once we'd got them fitted that was... 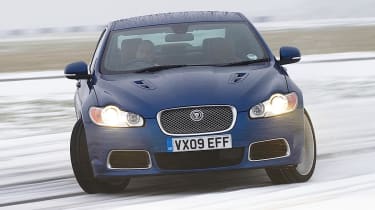 Remember the winter tyres piece we did with our Jag XFR in issue 141? Well it nearly didn’t happen – and all because of the weather.

Ironic twist number one: at first Pirelli couldn’t get the Sotto Zero cold weather tyres to the UK because of snow in Italy. Ironic twist number two: when the new rubber did make it to Tyres Northampton a week later, more snow meant the XFR was stranded 60 miles away, outside my house.

I wasn’t going to be dissuaded that easily, though, so I dug out some old snowchains, spent 30 minutes scraping my knuckles to the bone in the minimal gap between each rear tyre and wheelarch while fitting them, and then only needed them for 30 seconds of driving. The frustration and pain of that debacle was only offset an hour or so later when I finally united XFR with Sotto Zeros.

From that day to this I’ve been praying for snow, and the chief reason for this is not particularly attractive. My god you feel smug driving a 500bhp rear-wheel-drive supersaloon when you can take it places other cars can’t go.

Case in point: the slushy outside lane of a dual carriageway. How many times over the last few weeks have cars pulled out behind me, assuming that if I’m safe, they will be too? The telltale waggle of headlights in my mirrors is always followed by a ginger tiptoe back to the inside lane. (I’ve done it myself when I borrowed Stephen’s Clio for a night and tried to latch on to a passing Focus. The Ford driver must have sighed, shaken his head and felt the warm glow of smugness. I know I have.)

There is a downside, though. As reader Mike Copson highlighted in his recent letter to us (evomail 142), when the temperatures pick up and the roads dry out, cold weather tyres start to struggle. In the XFR it’s low-speed corners that provide the most frustration – you feel the treadblocks squirm and flex, while the traction control constantly cuts the 461lb ft being sent to the rear wheels. Try to cure this by turning off the electronic intervention and the tyres spin up with a sound like ripping linen, which does their longevity no good at all.

At high speeds this lack of precision is far less noticeable. The XFR is still wonderfully incisive into quick corners, feeling balanced and agile, and it remains explosive on the straights. All the things I love about it in the first place.