The hardcore Cup chassis is a near-essential Clio 200 option, but it has its downsides 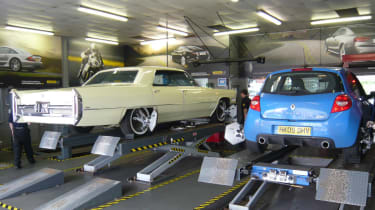 You’re a keen bunch, aren’t you? No sooner had evo 145 gone to press than I had dozens of replies to my query about the Clio’s sporadic alarm beep. Appears it’s a common occurrence, and a sign that I’m opening the door too fast! Big thanks to all who responded. And time for me to stop rushing around…

A number of emails from fellow Clio 200 owners also flagged up tracking and alignment problems. It seems the Cup’s stiff suspension set-up is rather susceptible to Britain’s knobbly roads, and it doesn’t take much to knock the front wheels out of true. Ours has already had a couple of adjustments, and it needed another before it set out on a 1200-mile trip to Spa. Full report on that next month.