A five-door estate version of the Jaguar XF is due. But will we get a 503bhp XFR station wagon? 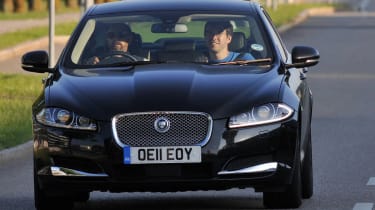 A Jaguar XF estate is on the way. It’s been rumoured as long as Jag’s BMW 5-series rival has been in production. And now one of the XF’s engineering bosses has confirmed the development of a five-door station wagon version. Being a Jaguar, it’s unlikely to just be an XF with a bigger boot tagged on the back. We can expect character and panache compared to its practical 5-series, Audi A6 and Mercedes-Benz E-class rivals, possibly at the expense of class-leading loadspace. The XF saloon’s engine range should put in fine service, with diesel choices being the newly launched 188bhp 2.2-litre four-cylinder and Jaguar’s 3-litre V6 in 237bhp and supercharged 271bhp form. Petrol sales would likely make up a very small percentage of XF estate sales, but we’d love to see Jaguar fit both its naturally aspirated 381bhp 5-litre V8 and its 503bhp supercharged twin, creating an XFR estate. The Mercedes E63 AMG Estate and future Audi S6 Avant both need a new rival… While there’s no official word on a more practical XF from Jaguar, expect the range to appear in the next two years with prices starting at around £33,000.